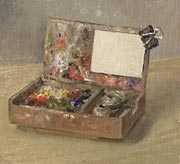 Our story thus far: in October of last year I wrote a post about Duane Keiser, a painter and teacher from Virginia who, in December of the year before (2004), had committed himself to the excellent but demanding practice of doing one small painting a day.

Most of his daily paintings were about 5×7″, or the size of a common postcard, so he called them “postcard paintings”, posted them on a blog he called A Painting a Day, and began to offer them for sale over the web, and then through eBay.

Originally his postcard paintings sold for $100, which is still the minimum bid for them on eBay, but now they sell quickly and usually for many times that. All of this is in addition to Keiser’s regular gallery painting as featured on his main web site.

He continued the practice for two years, painting small household and studio objects and using a old cigar box as an easel. At the two year mark, Keiser “slowed down” a little to allow more time for larger projects, but he has continued the process with amazing consistency, still often using the cigar box easel that is the subject of one of his recent paintings.

In the meantime, other artists began to follow suit, taking on the practice of one small painting a day, an excellent discipline for any artist. I posted about 5 of them in a Painting a Day Blogs post back in April. (I’ll call that “Round 2”).

Most of the artists taking on the painting a day practice and posting them on a blog, usually with some comments abut their creation, were also offering them for sale directly to potential buyers through eBay. The daily painting routine has the potential to contrubute to an artist’s financial well-being as well as encouraging artistic growth and establishing strong working habits.

Since then, a number of readers have written to let me know about other artists that are pursuing the painting a day regimen and I’ve finally assembled and organized a post about some of them. I’ll feature three today (“Round 3”) and four more tomorrow (“Round 4”). This is not a comprehensive list, and I’ll continue to watch the phenomenon as it develops.

Louis Boileau was a commercial illustrator and layout artist for 30 years. Through all that time all he really wanted to do was be a painter and that is now what he’s doing. His main web site is Still Lifes Plus on which he has galleries of landscapes portraits and a bit of commercial style work, but the highlight, not surprisingly, is the still life paintings. Many of them are from his painting a day blog Little Paintings from Orangeville which he has been pursuing for about four months. I can’t speak to the reality of this from the artist’s point of view, but I personally feel that his recent small works show a level of accomplishment noticeably above his previous work. They are rich, colorful, and wonderfully painterly, with no-nonsense brushstrokes that help define the forms as well as carry the paint. His objects are also starting to display a refined use of local, atmospheric and reflected color.

Darren Maurer is an artist from Sioux City, Iowa whose A Painting A Day: Miniature Masterpieces site and painting project has been going since March. Originally his goal was to simply try it for a month. After succeeding at that, he decided to take a break and then push on, a month at a time, as he reported on this post, which marked the completion of the first month. Maurer’s main site is Darren Maurer Fine Arts which has galleries of his full size work as well as a bio of the artist.

Connecticuit artist Jan Blenclowe started a Painting a Day Project that “blossomed” into a Flower a Day Project (no longer a blog, now an online gallery) taking advantage of her focus on plein air painting and her own bountiful garden. In addition to those sites, Blenclowe seems to have quite a garden of web sites, including her main website, a Squidoo Lens, her Pen, Pencil and Paper sketching blog and her main blog, Art & Life, on which she posts both her small daily paintings and larger works.