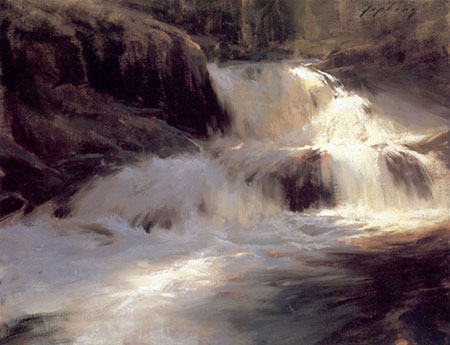 Value is one one of the most overlooked and misunderstood properties in painting. No, I don’t mean $Dollar $Value, the only property that seems to matter to some art collectors, I mean the range of value from dark to light, which is often difficult to separate from hue (the particular color) and intensity (how much color).

Jeremy Lipking is a California painter whose work is a study in the understanding and use of value.

He paints landscapes and figures. In both he employs careful control of value contrasts to move your eye and create focus within his images. His compositions are often created in a range of middle or even dark values punctuated by areas of white (or close to it). At other times he will do the reverse, place an almost silhouetted figure against a bright, almost white background.

Lipking shows a marked influence from John Singer Sargent (which is a Good Thing). He also acknowledges admiring the work of Joaquin Sorolla and Anders Zorn, but it is the Sargent influence that I find most interesting. Not that he is slavishly trying to copy any Sargentisms in his work, he has just absorbed elements that he likes and has put them in service of his own approach.

Lipking came from an artistic family and was formally trained at the California Art Institute. He has garnered a number of awards including Best of Show in the Portrait Society of America International Portrait Competition this year.

As you browse through his galleries try to think of the compositions in terms of value. What would they look like if all of the color were removed? In our quickness to be dazzled by color in painting, we often overlook the power of value. Jeremy Lipking does not.