In a joint exhibition at the Newark Museum in Newark, New Jersey and the Jewish Museum in New York City, Masters of American Comics will present almost 600 works by some of the greats of the comics art form.

The images shown here are not necessarily in the exhibit, I’ve just pulled them out as examples.

The Newark Museum will play host to artists who worked in the medium of newspaper comics from the “golden age” of the early 20th Century to to the middle of the century:

Winsor McCay, creator of the astonishing Nittle Nemo in Slumberland,

Lyonel Feininger, a painter who “dabbled” in comics for a year in 1906-07, bringing his modernist sensibilities to comic art in the pages of the Chicago Tribune,

George Herriman, whose innovative, adventurous and startlingly original work of genius, Krazy Kat, was never wildly popular but was tremendously influential on other artists (in comics and other areas) and is dearly loved by those who are devoted to it (myself included),

E.C. Segar, creator of Thimble Theatre, whose chief character became Popeye, and was a much more powerful and sophisticated strip than the TV cartoons would ever let you believe,

Frank King, creator of Gasoline Alley, an innovative and involving strip with characters that grew, changed, grew old and died over the course of the years in defiance of all “continuing story” conventions,

Chester Gould, creator of of Dick Tracy, iron-jawed, tough as nails detective with the roster of demented villains and science fictiony gadgets that would lay the groundwork for Bob Kane’s Batman,

Milton Caniff, master of pen and ink chiaroscuro and creator of the great adventure strips Terry and the Pirates and Steve Canyon

and Charles M. Schultz, whose Peanuts was one of the most popular and beloved comics ever.

The Jewish Museum will showcase comics from the middle of the century to the present, with an emphasis on comic book artists: 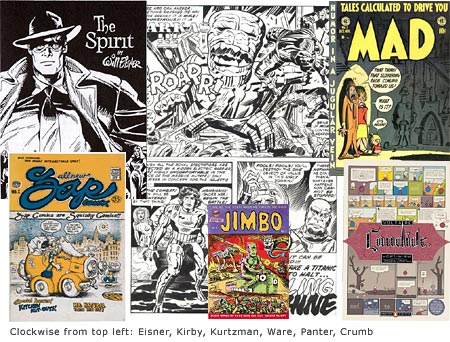 Will Eisner, creator of The Spirit and one of the medium’s most brilliant and influential creators and a sort of guiding beacon for those who try to create superbly crafted comics even to this day,

Jack Kirby, who essentially invented most of visual language and conventions of modern super-hero comics, co-created The Fantastic Four, The Hulk and many of the popular characters that Stan Lee takes too much credit for and was more imaginative than any roomful of current superhero artists put together,

Harvey Kurtzman, the brilliant, irreverent comic genius behind the original Mad comics, working with the great Wally Wood, Jack Davis and Will Elder, who he also collaborated with on the underrated Little Annie Fanny in Playboy,

Robert Crumb, who Zapped us all with the instigation of underground comix in the 60’s, the influence of which still ripples through every maverick, underground, self-published and independent comic as well as resonating in the spirit of the more adventurous web comics,

and Chris Ware, who combines comics, design and fanatical attention to detail in books that are crafted as works beyond the mere printed material on the pages.

Together, this is a tour-de-force of comic art, a history of the development of the art form and an eye-opening adventure into what comics are, have been and can be. It should just be an absolute blast to spend a day energizing your eyeballs with all of this great comic art.

The exhibit was created and originally presented in a joint exhibition by the Hammer Museum in Los Angeles and The Museum of Contemporary Art, Los Angeles. West coast readers hopefully saw the listings I had in the “Exhibitions” section of the lines and colors sidebar for several months earlier this year.

It’s our turn now on the east coast. The joint exhibition in New York and New Jersey runs from September 15, 2006 to January 28, 2007. The Jewish Museum is concurrently running another exhibit, Superheroes: Good and Evil in American Comics.

There is an excellent article on Art Knowledge News from which I borrowed he listing order of the artist names and gleaned some of the exhibit information.

Running down this list makes me feel like a slacker because of my unfinished posts on Herriman, Segar, Caniff, Eisner, Kirby, and Crumb, but I’ll get them finished and posted eventually.

5 Replies to “Masters of American Comics”