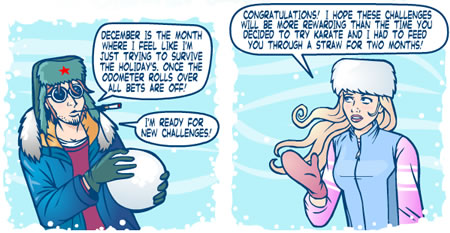 Here’s a webcomic to get “cool” with in the hot days of August.

So there’s this band, see, except that it’s just two people, but they get a new drummer, except that he’s really a secret agent looking for a cover, and they have these adventures, except that they’re more like pastiches of 60’s modern pop culture and design, and.. well, it goes on from there.

Wrap it all up in thick-outline drawings and graphic color, season liberally with dry humor, cultural references, parodies of travel ads and 60’s comic books, shake well, and and you have Acid Keg, a funny and visually entertaining webcomic by Steve Hogan.

Hogan draws from 60’s pop culture both for his story references and for the bright graphic look of the strip. He draws his characters in a broad outline style that has echoes of Archie comics, 40’s illustrators and 60’s poster and album cover art.

The first story is a bit darker, the second gets brighter an diverges from the plot more often with excursions into parodies and send-ups of various aspects of pop phenomena. He likes to play with stylized backgrounds and page layouts that are a big part of the visual appeal of the strip.

Some Acid Keg pages are reprinted in Webcomics, a book by Steven Withrow and John Barber that also features my own webcomic.

Hogan also has a site devoted to his illustration work (some material NSFW).