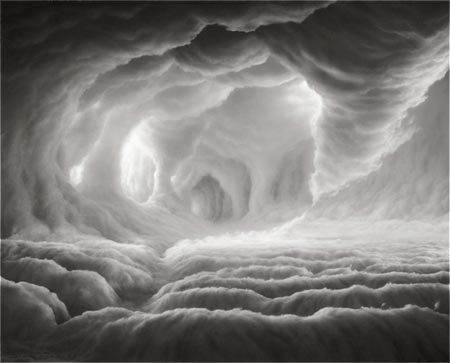 Somewhere between earth and sky, landscape and seascape, mountains and clouds, natural forms and imagined shapes, float the drawings of Hilary Brace.

Her richly toned, detailed charcoal drawings (she calls them “landscapes”) carry suggestions of twisted cloud towers, intimations of tornados and watersopouts, visions of waves and mountains and hints of mysterious tubes and tunnels.

Dark cloud-like forms collide with each other above textured ridges that could be mountains, waves or another layer of clouds. Light breaks through walls and layers, reflects off of some forms and shines translucently through others with angelic luminance.

Arches and domes, caves and breakers, rain, smoke or wisps of mist roil and tumble through her images, always blurring the lines between imagination and reality, natural forms and flights of fancy.

Brace consistently walks that line and refuses to give you solid ground to stand on, forcing your imagination to flap its own wings and make its own choices. The result is almost hypnotic.

Brace works in charcoal, that most plastic of drawing mediums, exploring and composing as the drawing is created. She draws on polyester film, starting with a completely darkened surface and pulling the forms out by subtraction rather than addition.

The drawings are small in scale, more or less postcard size, but their imaginative scope is as large as the sky. (Or is it the land, or the sea?)