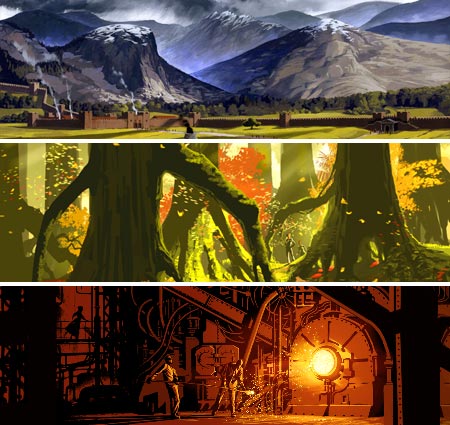 Peter Popken is a concept artist, illustrator, visual development and storyboard artist for the film industry. He has worked on films like V for Vendetta, Aeon Flux and The Bourne Supremacy.

Many of the film concept images on his site are dramatic landscapes or cityscapes, painted in widescreen ratios. There are also character designs, storyboards and illustrations.

He utilizes several rendering styles, from the crosshatched linework in some of the storyboards to the direct no-nonsense approach of some of the concept paintings, which can be wonderfully graphic at times with flat areas of color crafted into three dimensional shapes.

His concept paintings are often almost monochromatic, with areas of more intense color in a different range used for emphasis and focus. Sometimes he will use a more softly rendered approach or the color-filled line style where appropriate.

Some of the movie work is labeled, but some of the storyboard work is not. I’m curious about a very cool storyboard he did for what is apparently a car ad, in which the car is injected into a patient’s bloodstream.