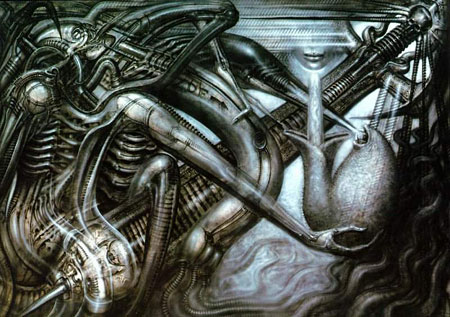 Sympathy for the Devil Dept.: I couldn’t resist a segue from yesterday’s post about Andrew Gonzalez’s images of transcendent grace to H. R. Giger’s grotesque collisions between tortured biological forms and nightmare machinery. Sort of balances the scales. (“Angels: 1, Devils: 1, highlights at 11.”)

H. R. Giger is a Swiss painter most noted for his unsettling designs for Ridley Scott’s film Alien. The original alien creature was based on an already existing painting of his called “Necronom IV”. Giger’s design work for the film earned him an Oscar. He also worked on Alien 3, Polgergeist II and Species. Giger also created memorable album cover art, most famously the cover images for Emerson, Lake and Palmer’s Brain Salad Surgery, the original artwork for which apparently was stolen recently from an exhibition in Prague (reproduced here and here).

Giger paints in airbrush at a fairly large scale. He has also created jewelry and furniture as well as designs for interiors. His work has been very influential, and much copied and imitated, among adherents of the darker side of popular culture.

Giger’s fantastic realist paintings are intricately detailed, darkly monochromatic and can be disconcertingly horrific. In addition to his obvious skills as a painter, I have to admire the way he has managed create imagery that can so effectively push people’s buttons through the use of particular kinds of forms and bits of imagery that are juxtaposed in disturbing ways, rather than overtly depicting acts of violence.

His approach is to use biological forms, sometimes with deliberately “scary” connotations, like skulls and exaggerated teeth, but more often with repeated forms suggestive of bones, ribs, vertebrae and digits, that blend into, are pierced by, or are morphing into, darkly menacing machinery, a synthesis he calls “biomechanical”. With this he blends sexually suggestive forms, and intimations of painful relationships between the biological and mechanical parts.

All of this grotesque confluence of body parts, rods, levers and gears is often painted as if under what might be a painfully thin layer of wet or slimy flesh. (Delightful, eh?) The image I’ve chosen here is somewhat representative, but actually on the mild side.

Because of the disturbing nature of his images, and the fact that they are evidently a response to Giger’s reported problem with the sleep disorder “night terrors”, he is in many ways a painter more in the vein of true Surrealism, which sought to shock and disorient and was concerned with images from the unconscious, as opposed to most of the contemporary Fantastic Realists that are often labeled “Surrealistic” simply because their work is “odd”. Giger apparently was introduced to Salvador Dali by Louis Buñel and met with him on several occasions.

Giger has obviously been influenced by the Surrealists, as well as visionary painters like Arnold Böcklin. (He even did a homage to Böcklin’s Isle of the Dead.)

Giger’s work has been reproduced in over 20 books, the most famous of which is Necronomicon.

There is a Giger Museum in Switzerland. Giger’s official web site, and that of his US publisher, have some information and images but lack actual image galleries and seem to exist mainly to sell merchandise. I’ve listed some unofficial galleries below.

Note: the sites linked here contain images suggestive of sexuality, pain and horror. Avoid them if you’re likely to be offended.