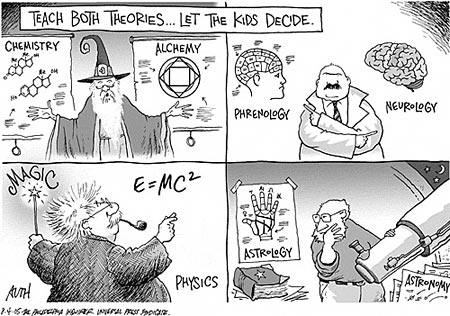 Tony Auth has been the editorial cartoonist for the Inquirer (which happens to be a great paper, even if it is being gutted by cost cutting like the rest of the nation’s great papers), for over 30 years. Auth drew cartoons for his college newspaper at UCLA. He started a career as a medical illustrator, but kept drawing cartoons for the UCLA Daily Bruin and eventually joined the staff of the Inquirer as their editorial cartoonist in 1971. He also currently serves on the editorial board of the Inquirer.

When he started, he was a brash, headstrong, angry young maverick, hot to expose injustice, fraud, idiocy and corruption in government and wherever else he encountered it. Delightfully, the subsequent years don’t seem to have changed him that much.

Right off the bat, Auth ran against the current of drawing styles among editorial cartoonists at the time, presaging today’s somewhat more divergent array of styles. Where most editorial cartoonists favored more highly rendered images, utilizing cross hatching, croquille board or heavy washes to create detailed drawings, Auth chose a style that leans more toward the pared down ink line and subtle wash drawings of sophisticated magazine gag cartooning. Except for their obvious political content, Auth’s cartoons would not look out of place in the pages of The New Yorker.

There is a delightful efficiency in his his linework that goes straight to the point, much like the writing of his cartoons. Where others might devote a lot of detail to their caricature of political leaders, or go through a lot of machinations to make a point, Auth makes his statement with a few carefully chosen lines.

Auth has won numerous awards. In 1976 he won the Pulitzer Prize for Editorial Cartooning and in 2002 he won the infrequently awarded Thomas Nast Prize, named for the father of American political cartooning. (See my post on Thomas Nast.)

For reasons that completely elude me, the Inquirer doesn’t have a single, easily bookmarked web page for accessing the latest Auth cartoon. You have to find your way to the editorial page and then click on “Today’s Auth Cartoon” at the top of the center column. Or, you can go to good ol’ Slate Magazine, which actually knows how to do an online publication, and gets it right with an easily bookmarked Tony Auth page.

Open note to the Philadelphia Inquirer online edition: Umm… just a thought, but if you’re trying to increase traffic, and you have a cartoonist of this caliber, instead of burying him three clicks in, you might put a nice big, colorful “Today’s Auth Cartoon” button on the home page and make it easy to bookmark. You think?