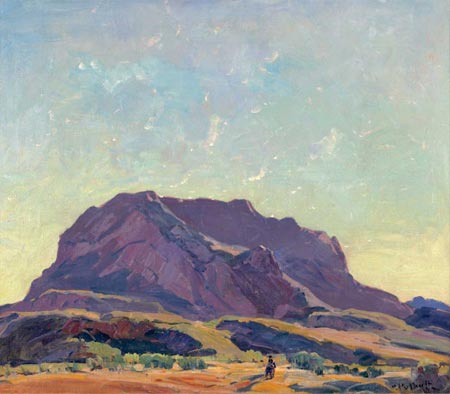 Hanson Puthuff was a commercial artist from Missouri, working in Denver and then Los Angeles at the turn of the 20th Century. While producing signs and posters for advertising, he continued to paint on his own time. He eventually abandoned commercial work to pursue his interest in plein air painting and became one of the preeminent California painters working in the Impressionist style.

He was in demand as a muralist, including a set of dioramas for the Natural History Museum of Los Angeles County, and also painted a series of views of the Grand Canyon for the Sante Fe Railroad.

He painted the rolling hills, mountains, plains and valleys of California with an open, broad-stroked style, combining vibrant colors and subtle atmospheric perspective. He remains one of the most popular and widely collected of the California plein air painters from the 20th Century.