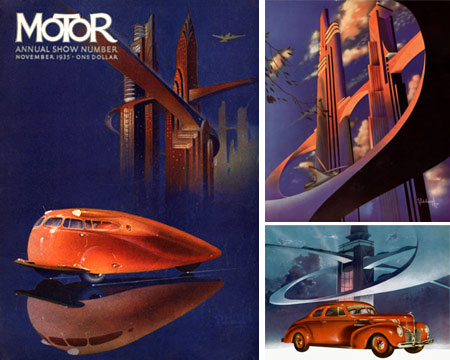 Are we there yet? Is this the future?

Apparently not, judging by the lack of seed-shaped aerodynamic three-wheeled cars and art deco skyscrapers (Chrysler Building notwithstanding), but the future as depicted by futurist illustrator Arthur Radenbaugh in the 1930’s would have been very cool indeed.

Radenbaugh did his futuristic renderings of cars for Motor magazine, and his advertising and editorial illustrations for magazines like Esquire, Fortune and Advertising Agency with an eye to the future, and rendered them with a futuristic tool, the airbrush, which was coming into broader use at the time.

The ability of the airbrush to lay down remarkably smooth, even tones and gradations (today being replaced by digital tools that do the same thing more easily), made it the tool of choice for rendering a future that would obviously be seemlessly smooth, shiny and sleekly modern (just like today!)

There is a virtual exhibition of Radenbaugh’s work, Radenbaugh, The Future We Were Promised online as part of The Palace of Culture Museum.

Hey, I still want to know why we don’t all have a gyrocopter in our driveway. Must not be the future yet.