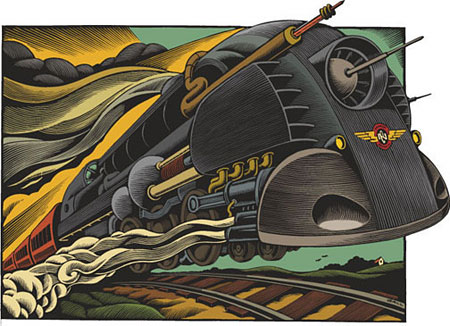 Chris Gall is an illustrator and author living in Arizona, and is also an adjunct professor at the University of Arizona.

His paintings seem to have a social realist, heroic WPA mural sensibility to them, and occasionally feel a bit like Thomas Hart Benton doing illustrations for Popular Science.

What I find most interesting, though, are his engravings, which I would have taken for colored pen and ink drawings had he not listed them that way. These have a terrific mix of strong, graphic color and controlled line work, along with a bold sense of composition that again takes cues from 30’s and 40’s posters and illustrations.

Gall doesn’t indicate on the site specifically what these illustrations were originally for, but his clients include Time, Newsweek, The Washington Post, The New York Times, Harper Collins, Nike, Ford, and many others.

Almost any of the pieces in the “engravings” section of his site would make a terrific poster. Gall does, in fact, offer Giclée prints and other items if you contact him, but doesn’t have a store per se on the site.

Gall is also the author/illustrator of three books. He spent 4 years as a professional stand-up comedian and currently gives presentations in schools in which he presumably uses some of those same skills.