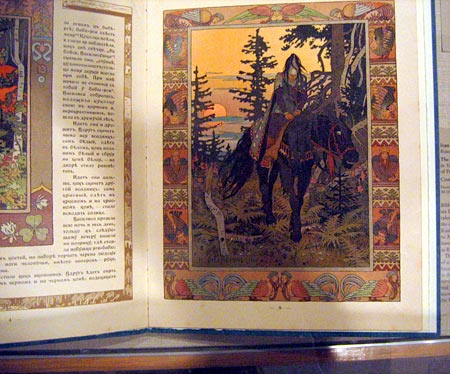 Every once in a while I stumble across something by accident that turns out to be a great find.

I was in the Met in New York last weekend and they have a wonderful practice (fortunately in common with many major museums lately) of rotating works into view from their collection of drawings, prints and photographs that ordinarily can’t be on permanent display because of sensitivity to light. One of the many upsides to this is that works come to light that might not make it to the curator’s list for major displays and wouldn’t be seen under other circumstances.

I was walking by a case in which some lushly illustrated books were on display and noticed that they were open to wonderful, brightly colored illustrations by an illustrator I was not familiar with. I took some photos (image above) and noted the artist’s name: Ivan Bilibin. On looking him up, I was pleased to find that there were a number of resources on the web, and I’ve listed what I could find for you in the links below.

Bilibin was a Russian illustrator working, more or less, during the peak times for great illustration around the turn of the 20th Century, but he seems to have been outside of the mainstream and took most of his influences from Russian folk art, Medieval and Renaissance art, Art Nouveau, and the open line and filled color style of Japanese prints. (See my posts on Hokusai, Yoshida and Hasui.)

Bilibin is most famous for his illustrations of Russian fairy tales which he illustrated with a colorful clear line style that incorporates decorative elements both within the images and at times surrounding them.

Bilibin eventually moved into stage and costume design for operas and ballets and also ventured into murals and straightforward landscape painting.

I was also delighted to find that there are books available with his illustrations, including Russian Fairy Tales, although I haven’t see them first hand yet.