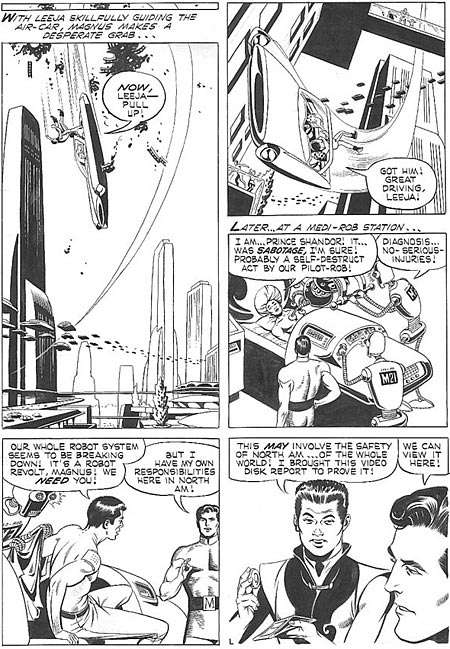 You might look at the comic page above and think “Oh, someone’s doing a take-off of Star Wars.”, except that you’d be wrong by almost 40 years. It’s a page from Magnus, Robot Fighter 4000 AD, a character created and drawn by comics artist Russ Manning in the early 1960’s.

Magnus, Robot Fighter depicted a semi-utopian world of the year 4000, in which great-looking men and women living in cities of sleek skyscrapers and flying cars had abdicated many of their personal responsibilities to domestic and official robots, with less than ideal consequences. The strip was drawn in a beautiful style with elegant linework and superb draftsmanship. His futuristic designs still look advanced, where most science fiction illustration and comic art from the time looks impossibly dated.

Ironically, Manning did later work on Star Wars comics, writing and drawing the Star Wars newspaper strip in the late 1970’s, toward the end of his career. He also worked on the newspaper strip Tarzan as well as the Tarzan comic book other comics for Dell and Gold Key. He also created Tarzan graphic albums that were aimed at the European market (and are now being reprinted by Dark Horse).

Manning was influenced by comics greats like Alex Raymond and Al Williamson, and in turn has been a great influence on many contemporary comics artists, among them William Stout and Dave Stevens, who worked as his assistants at one time, and in particular Steve Rude, who shows a dramatic influence from Manning’s solid draftsmanship and beautifully controlled line.

There an extensive, if somewhat awkward to navigate, Russ Manning Tribute on the online Edgar Rice Burroughs magazine ERBZine. Look for images outlined in blue, which connect to enlarged images or additional pages. Most of the images are not large, but you can get a feeling for the quality of his work and the extent of his career. The Magnus, Robot Fighter sequence from which the above page comes is on this page.

The beautiful Magnus , Robot Fighter 4000 AD stories are being collected by Dark Horse and released as hardback collections, Volume 1, Volume 2 and Volume 3. There are also collections of the European-aimed Tarzan albums, Tarzan the Untamed, Tarzan: Jewels of Opar and Tarzan: The Land that Time Forgot.

One Reply to “Russ Manning”