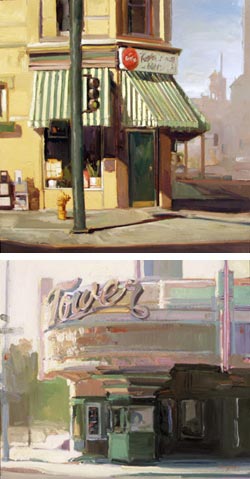 Although influenced by Sargent and Whistler, Francis Livingston painted for a while almost monochromatically, but eventually embraced color with a vengeance, apparently after studying the painters of the Bay Area Figurative Movement, the California Impressionists and their inspiration, the original French Impressionists.

I wouldn’t put Livingston’s work in the Impressionist mold, though. Instead of small strokes of color optically blended to make larger shapes, he uses big bold blocks of color, chips and chunks of color, (perhaps troweled in with a palette knife in places) to define his forms.

In fact he seems to luxuriate in the physical presence of the paint, using wonderful fat strokes of buttery oil paint, laid on with three-dimensional thickness, stroke defining edges raised above the surface of the canvas. The effect is one of energetic abandon to the luxury of color, and a feeling of the rich sensuality of paint, looking as if it was just squeezed from the tube.

His subjects vary from urban scenes, particularly theater fronts and amusement parks, to landscapes of the American west, specifically Idaho where he moved with his family after living in San Francisco for a number of years. His color range varies with subject, at times with bright contrasts and other times in muted, atmospheric harmony. He also seems particularly intrigued with the geometry of his subjects, and his compositions often emphasize the primitive shapes he sees in them.

Livingston’s bios list him as having been a successful illustrator, although I haven’t been able to find much in the way of examples of his illustration on the web. Fortunately, there are plenty of examples of his gallery work on several sites for commercial galleries, a couple of which have large enough versions of the images to get a feeling for the rich, painterly quality of his canvasses.