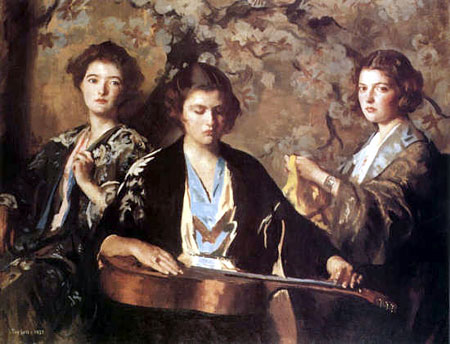 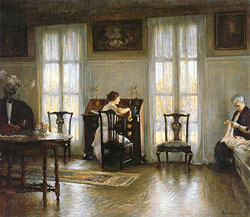 Painters throughout history have used family members as models, although usually in the service of a composition where they were painted to represent historical, literary or allegorical subjects. In the late 19th Century that changed as many painters, particularly the Impressionists and artists who were influenced by them, began to paint their immediate relatives in compositions meant to capture the immediacy of contemporary life.

Edmund Charles Tarbell, who is one of the most important of the painters classified as “American Impressionists”, was an enthusiastic participant in this approach. He often populated his canvasses, whether his sun-drenched plein air scenes or his magically serene interiors, with images of his wife, his wife’s sisters, his children and his grandchildren (image at top, My Three Granddaughters, 1937).

In addition to studying at the Boston Museum School, where he would eventually become an influential instructor, Tarbell studied in Paris at the Académie Julian. While in Paris he became exposed to both the revolutionary ideas of the French Impressionists and the great masters of classical art in the Louvre, and he represents one of the most fascinating points at which those two streams of artistic thought converge.

One of the nice things about writing a blog like lines and colors is that I never know when someone will write an email or post a comment about a piece I wrote some time ago. I wrote a post on Tarbell back in May of this year, in which I posted an image of Tarbell’s painting Mother and Mary, showing the artist’s wife and one of his daughters in his home in New Hampshire (left, above).

I was delighted to recently receive an email about the post from Louisa Severance, whose stepmother is one of Edmund Tarbell’s granddaughters. With her kind permission I’ve reprinted it here:

I am here with my stepmother Tarbell, who is Edmund Tarbell’s grandaughter. The painting on your blog page is Tarbell’s aunt at the desk, the artist’s daughter, [and] her grandmother, the artist’s wife. The living room looks just like this. One of the things that I think enhances the light is the reflection of the sunlight off the Piscataqua river which flows about 200 feet from the back of the house in Newcastle, New Hampshire. There was a wonderful exhibit in Nashua, NH several years ago which contained about 50% of his paintings. Check out the catalogue, the paintings are wonderful. Perhaps that is the same exhibit you are referring to.

The reason I am writing you is because I wanted to show “Tarbie” what was on the internet about her grandfather. She was astounded and thought he would be very pleased. I was interested to see he was referrenced in a blog and had to have a look. Tarbie appears in several paintings and is every bit as lovely now as she was beautiful then.

Somehow, the idea of one of Edmund Tarbell’s granddaughters checking out mention of her grandfather’s work in the web in 2006 strikes me as wonderfully cool.

The exhibit mentioned is the one I list in my previous post. There is a description of the exhibit here, along with a brief bio of Tarbell. The catalog of the exhibition, Impressionism Transformed: The Paintings of Edmund C. Tarbell, by Susan Strickler, Linda J. Docherty and Erica E. Hirshler is, as Louisa points out, a beautiful volume and makes a good introduction to the artist’s work. Another nice book is Edmund C. Tarbell: Poet of Domesticity by Laurene Buckley, You will also find Tarbell mentioned prominently in books about “The Ten American Painters”, the group of American Impressionists of which he was a founding member (see my post on Childe Hassam).

For those of you who are not familiar with Edmund Tarbell, I listed some sites and resources for Tarbell’s work on my previous post and I’ve rounded up more for this one. One of them, the Artcyclopedia page, lists museums in which you can see some of Tarbell’s works first hand, which I highly recommend if you get the chance.

And for those artists who are reading this, look around you. Perhaps the people in your immediate family have the potential to be among your best subjects, as they were for Edmund Tarbell.