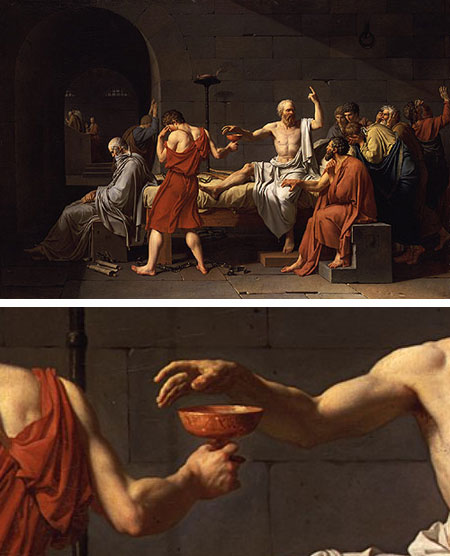 Political revolution can often coincide with a revolution in art, but sometimes political upheaval can send art backwards, looking for reaffirmation in older forms.

Jacques-Louis David (pronounced da-veed) was a painter at the height of French neo-classical style and at the center of the turmoil of the French Revolution and its aftermath.

As a student David won the prestigious Prix de Rome from the Royal Academy and, after studying in Italy for five years, returned to be made an Associate member of the Academy and later a full Academician.

He was a student of Boucher, the great painter of the Rococo (and a distant relative) who, along with Fragonard, represented the fun, frivolity, eroticism and decadence of a style that David would reject for the austere beauty of the neo-classical. David himself was an enormously influential teacher, counting among his pupils François Gérard, Antoine-Jean Gros, Jean-Babtiste Iasby, and the amazing Jean Aguste Dominique Ingres, as well as the American naturalist painter John James Audubon.

David was a masterful draughtsman, and representational drawing and respect for the refinement of form in the sculpture of antiquity formed the basis for his art, as evidenced in “The Death of Sacrates”, above, where we can see Socrates expounding while reaching for the hemlock in a formal tableaux drawn and rendered with consummate skill. Ol’ Socrates is looking pretty pumped-up and sprightly for being 70ish, but, hey, that’s the point of neo-classical art, it’s idealized to the max.

Looking back form the post-Romantic viewpoint of the 19th Century, let alone the 21st, it’s easy to see David’s monumental solidity as cold and lifeless, but the desire to live in the ideal of the classical was a passion, inextricable from his political passions. David was not only caught up in the revolution, but was directly and fervently involved. When Napoleon came to power there were many painters in the circle of the emperor (including Prud’hon), but David was the main painter to the emperor and it was he who created the painting that provides than now-clichéd image we have of Napolean with his hand tucked into his vest.

David’s life of political intrigue would undoubtedly fill a a fascinating book, as would his many paintings, austere perhaps, but masterful and supremely accomplished; and if you look for his portraits, you may find an unexpected warmth and force of personality lurking in the formal compositions.