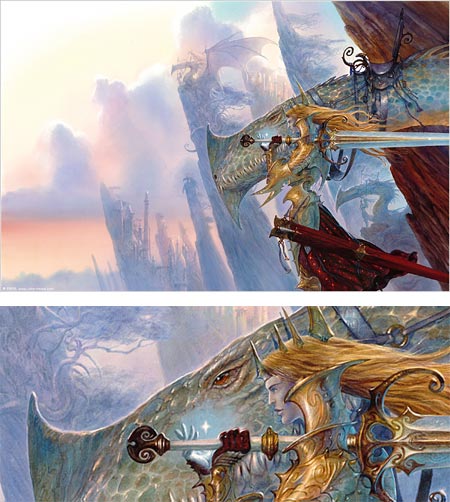 Fantasy artist John Howe is best known for his illustrations of J. R. R. Tolkien’s works, creating illustrations for editions of The Lord of the Rings trilogy, The Hobbit and related calendars in the early 90’s. Peter Jackson tapped him, along with Alan Lee, to be lead artists on his large scale movie adaptation.

Howe also worked on the film The Lion the Witch and the Wardrobe, and is presumably involved in other movie projects. Howe was born in Canada, studied in France and is now living in Switzerland. He has illustrated numerous other books in several countries, primarily but not always in the fantasy and medieval genres.

Despite having a bio page, his site doesn’t have much in the way of a quick introduction, instead it seems to assume that you’re already aware of his work and are back for more news. Someone with more time/patience than I could probably find more background info by digging through the pages devoted to news, travels, FAQ and fan forums.

There are plenty of images, though. They are pulled from a database, so you can view them by various categories, like topic, most viewed, highest rated, newest, etc. Some, like “Elves & Dragons” (image above), have links to very large versions and even preliminary sketches.

There is a supplementary site here, apparently for an exhibition of his work in conjunction with a cultural event of some kind in 2007. (I haven’t had time to try to translate this for more details.)

Addendum: The site for this event, Saint-Ursanne, La Fantastique, has been updated and is now available in English, as well as French and German. The event takes place in a medieval city that was the inspiration for many of Howe’s paintings for The Lord of the Rings. A description for the site reads: an exclusive exhibition of John Howe paintings in the cloisters and cellar gallery, fantastical installations all around the city, classical and Celtic concerts, medieval festivities, encounters around J. R. R. Tolkienâ€™s novels, documentaries and evening cinema in the reconverted factory â€œFours Ã  Chauxâ€.