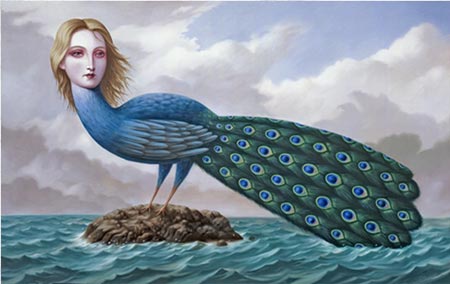 Alex Gross is an illustrator and gallery artist whose work is a fascinating amalgam of images and influences, rendered in a highly crafted and meticulous style that gives his compositions an uncanny feeling of authority.

He creates large scale and sometimes highly detailed paintings that are filled with iconic images that may or may not be allegorical. Snakes, birds and butterflies are placed in odd contexts. Faces are often dour or troubled in a manner somewhat reminiscent of George Tooker’s monuments to isolation. Clouds take unusual forms, sometimes as patterns, occasionally as actual objects like falling airplanes, a repeated theme in several images.

There is a kind of delicate and careful eerieness to his more recent gallery paintings, which feel like allegorical portraits, contrasted with a more energetic play of imagery in his older paintings (which I have to say I prefer).

Gross’s canvasses can have a certain Gothic formality about them, as if time has been conveniently stopped and elements of reality carefully mixed and arranged in some kind of cosmic diorama before being carefully recorded by the artist.

There is a feeling of graphic nostalgia in almost all of his work, recalling early poster art, mixed with elements of pop surrealism, bits of American and Japanese pop culture and dotted with the iconic butterflies and other weird symbolism — a sort of retro-future nostalgic pop-classical synthesis. (Sorry, I couldn’t resist.)

Gross studied at the Art Center College of Design in Pasadena and in 2000 travelled in Japan for two months on an artistic scholarship, collecting examples of Japanese gallery art and commercial art. Part of the collection was published by Taschen as Japanese Beauties (Icons). There is also a beautiful new hardcover collection of Gross’s own work, The Art of Alex Gross: Paintings and Other Works from Chronicle Books.