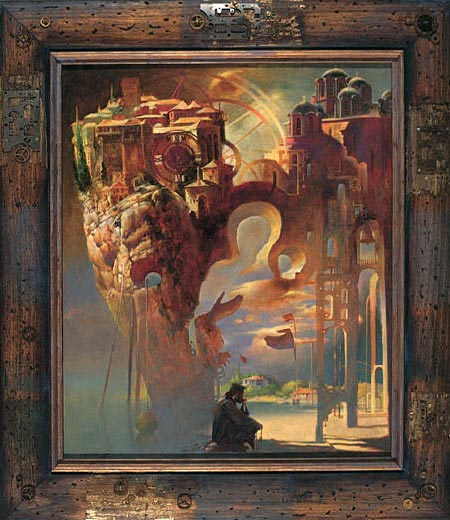 Sergi Aparin is a contemporary Russian painter currently living and working in Belgrade.

Unlike many of the newer artists who are often classed as “Pop Surrealism”, Aparin is working firmly in the vein of the classic Surrealist artists like Dali and Magritte. In particular his work shows the influence of the Spanish Surrealist, but not just in the expected ways. Many artists who have been influenced by Dali have tried to capture his startling ability to rearrange reality, but Aparin goes beyond that to a deep appreciation of Dali’s mastery of old master painting techniques, particularly those of Velazquez.

Aparin shows the influence of the hyper-real landscapes and hallucinogenic skies of Dali’s later work. There are also nods to Magritte, Ernst and the other major Surrealists painters, but the ultimate synthesis is Aparin’s own.

His themes often involve villages that are ships (or ships that are villages), objects that emerge from or are displayed on stone, repeated forms that suggest connection between very different objects (pomegranates and planets, insects and aircraft, dirigibles and fish), images of clocks and particularly clockwork mechanisms and pastoral lakes and streams with other worldly shores, all brought into sharp focus by an intense magic realist painting style.

One of the interesting things about Aparin’s images is that they often include observers, images of people in the foreground of the painting with their back to you, who are evidently looking at the same scene as you are. Some of these are possibly representations of the artist himself, others are children (some of which may again represent the artist at a young age), others are obviously not the artist but may have meaning beyond the obvious.

His images seem laced with dream-like phantasms, arcane symbols and psychological inferences, which put them in the tradition of true Surrealism.