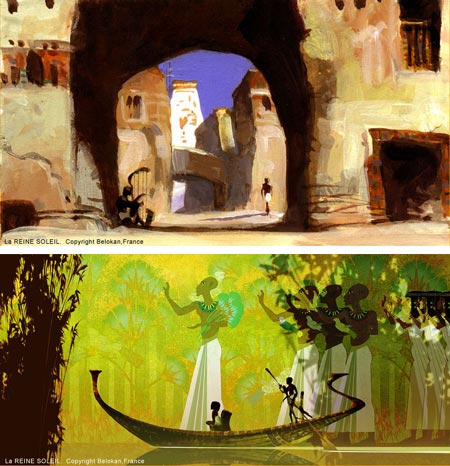 I came across Neil Campbell Ross as a member of Uli Meyer’s animation studio (see my recent post on Uli Meyer). Even among the other talented members of the studio, I was struck by Ross’s wonderfully drawn and designed concept illustrations.

Ross is a concept and production artist, designer and art director. He has worked on a number of commercials as well as projects like Braveheart, An American Tail 2, Space Jam, Tarzan2, Antz, The Corpse Bride, Charile and the Chocolate Factory and the new Aardman/Dreamworks film, Flushed Away.

While looking through Ross’s portfolios, both on the Uli Meyer site and his own, I was particularly impressed with the images for a project called La Reine Soleil (which might be loosely translated as “The Queen Sun” or “The Sun Queen”), a full length French animated film about an adventurous voyage by a daughter of Nefertiti (images above).

Also notable are his designs for Thorgal, an animated adaptation of the Belgian comic book by Jean vn Hamme and Grzegorz Rosinski, and The Leopard Scarab, a proposed film project.

The portfolio on the Uli Meyer site is a little harder to access, but worth the trouble because the images are often larger than those on Ross’s own site. I can’t give you a direct link because the site is in Flash. After waiting through the intros, go to Artists, and then to Neil Ross. His own site has smaller images, but more of them and also includes more animations.