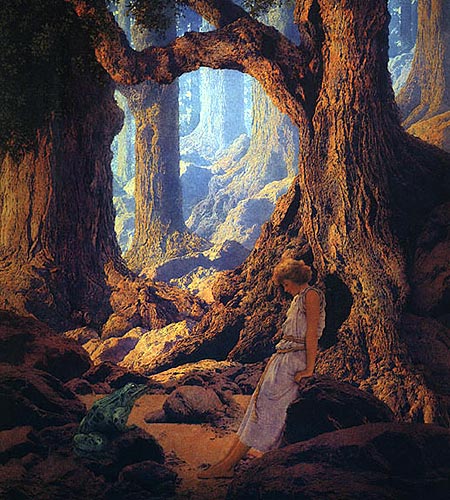 In many ways Maxfield Parrish was the antithesis of the popular image of bohemian artists, struggling for recognition and starving in noble sacrifice for their art. He was precise, orderly and methodical and was successful throughout his career.

Born into a family that unflaggingly encouraged his interest in art, he was taught initially by his father, Stephen Parrish, an engraver and landscape artist. Maxfield, whose given name was Frederick, chose to use his Grandmother’s maiden name as his middle name and became known by it. He was born in Philadelphia, graduated from Haverford College and went on to study at the Pennsylvania Academy of The Fine Arts and also attended classes given by the great illustrator Howard Pyle at Drexel.

Pyle reportedly looked at Parrrish’s portfolio and said that there was nothing he could teach him, and simply encouraged him to develop a unique style. That is something Parrish certainly did. His work, although an integral part of the Golden Age of illustration, was unlike any artistic school, style or movement at the time. Since then, of course, he has been very influential and much imitated.

Few can imitate his actual technique, however. Parrish would painstakingly build up his luminescent colors in layer after layer of transparent glazes. Unlike the old masters who originated this technique, Parrish used a blue and white underpainting, rather then the traditional grissaile or terra verde. If you ever get to see his originals, you wll be struck by the jewel-like quality of his colors, almost like looking through stained glass. Parrish, in fact, collaborated with the famous glass artist Louis Comfort Tiffany on glass mosaic mural called The Dream Garden, which can be seen in the Curtis Center near Independence Hall here in Philadelphia.

Parrish was renowned for his unorthodox use of color. His images are ablaze with brilliant hues that are often contrasted with their complementary color in the same image or on the same object, causing them to be intensified. He was also unorthodox in his mechanistic and methodical approach to composition and usually prepared his paintings from elaborate combinations of photographic reference, models and constructions. After making his mark as an illustrator for magazines like Colliers, he moved into painting specifically for reproduction as mass-produced prints, the first and most successful of which is his famous Daybreak (detail here).

What he really enjoyed doing most was landscape, and he created landscapes for 30 years for Brown & Bigelow, a calendar and greeting card company. His landscapes were never painted from life, though, and seldom referenced any real place. They were usually amalgams of images from various sources, a tree from his yard, a photograph of a mountain and a stream from somewhere else.

In fact, Parrish would often “construct” his own landscapes. He kept 30 or so pieces of granite, quartz and other rocks in his studio. These were painted a neutral brown and arranged on a piece of glass, giving the appearance of a reflective lake, set in layers of powered rock and strongly lit to give him the custom-designed landscape he wanted to paint. His colors were obviously those of his own choice and not those of nature, together producing a world of landscapes as unique as the masterful approach of the artist who painted them.