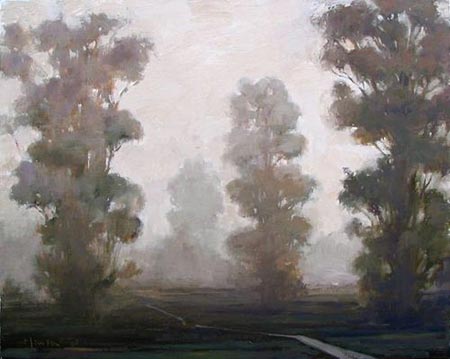 Terry Miura is an artist who took a path from an illustration career to a dedication to gallery painting. After working in New York for six years creating illustrations for clients like Time, Newsweek, Random House and GRP Records, he transitioned his part-time devotion to painting into a full time pursuit.

He returned to California, where he had studied at the Art Center College of Design, and his subject matter followed suit, from New York cityscapes to landscapes of the Caifornia hills and valleys. In exploring his galleries, you will also find paintings from trips to Umbria, primarily landscapes with a few scenes of streets and cafes, and occasionally a still life. The paintings are arranged by gallery showing.

All reveal an open, painterly approach that dwells as much on atmosphere and mood as on the features of the scenes themselves. There is also a very strong sense of the importance of composition, geometry and the arrangement of areas of color as elements in themselves.

He is currently working on landscapes that are non-specific, or according to Miura, “Although they’re still very much representational, they’re not about specific locations.” Instead the landscapes are meant to represent evoked memories.

His site is arranged as a blog, with links to the galleries to the left. 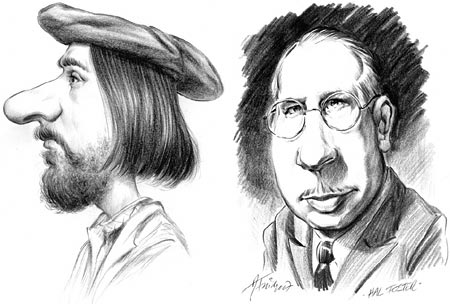 Roberto Freire does wonderful caricatures and, as of January 1 of this year, has repurposed his blog, Robolus.com, to be dedicated to his New Year’s resolution to draw and post “A Caricature a Day”.

He had my attention immediately when I saw his caricatures done from drawings by the great portrait artist Hans Holbein the Younger (above, left). He insured the fact that I will be checking back often when I saw his wonderful portrait/caricature of Hal Foster, one of my all time favorite comic strip artists (above, right).

Be sure to click on the images in his blog postings to view the larger versions, so you can see the really nice line and tone quality in his drawings. At times his line work can have some of the wonderful looseness you see in Mort Drucker’s terrific caricatures.

I’m fascinated to know where Freire will look next for inspiration. He’s already done caricatures from other painters, from film and television and other sources.

Beyond the daily project, you can find other caricatures on previous months in the archives of the blog, along with paintings, musings and articles of interest on a number of topics. 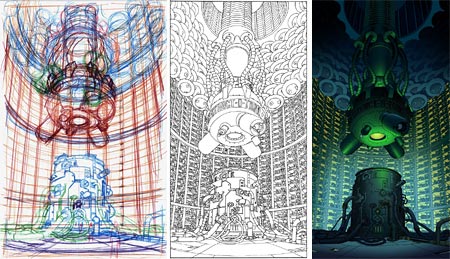 Daniel Adel is an illustrator, portrait and gallery artist. He has done editorial illustration for clients like The New Yorker, The New York Times, Vanity Fair, Forbes and Esquire, as well as cover art for those publications and others like Newsweek and Time, including the Time Man of the Year cover in 2004.

His illustrations are often whimsical portraits of celebrities and newsmakers, rendered with a confident realism, and anthropomorphic animals that look like they might be suitable for somewhat dark children’s book illustration.

He also paints commissioned portraits, with a number of prestigious clients, and he is represented by Arcadia Fine Arts in New York, a gallery with a terrific roster of artists, but an unfortunately awkward online gallery arrangement that requires horizontal scrolling by hovering your mouse over a JavaScript link.

After looking at his illustrations, you might expect his gallery work to be straightforwardly figurative, or at most, stylized figurative work, but the paintings are intentionally narrow in subject matter and follow a fascinating theme of light and dark.

They are dramatically staged draperies, arranged to look as though they were in motion, along with arrangements of crumpled paper, theatrically lit as if large in scale and, recently, paintings of white fluids in dynamic cascades and waves, as though roiled by violent motion. These paintings have a common theme of twisting and turning movement, intricate folds, and a consistent arrangement of white foreground subject set against a dark background.

Adel and his wife divide their time between New York and the village of Lacoste in Provence, France, where Adel established a gallery and studio and from which he publishes a local arts journal, “L’Os de Figue” (The Figbone). There is section of his site devoted The Figbone, from which you can download a PDF copy.

The “Art” section of his site links to the Arcadia site for his oils, but also includes photographs and straightforward watercolors of buildings and countryside in Provence.

My thanks to two different sources who suggested a post on Adel within a week of one another. One is David Malan, who responded to my post about him with a suggestion to check out Adel’s site. The other is Michael Connors, who coded Adel’s website and created and maintains morgueFile, a free image reference site. (Comic book artists and illustrators, myself included, would often maintain “morgue files”, folders of photos clipped from magazines for visual reference. The web now provides a much easier alternative.) 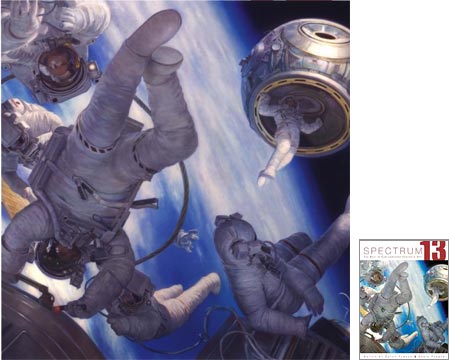 I should have written about this sooner, but I have such a long list of goodies to tell you about that it can take a while to get to a particular one.

Spectrum 13 (Amazon link) came out a couple of months ago. This is the latest in the Spectrum yearly collections of contemporary fantastic art.

As you might expect, this includes fantasy and science fiction illustration, but it also includes comic book artists, dimensional artists (sculptors and modelers) and 3-D artists; and has expanded in recent years to include more fantastic themed art from mainstream editorial and book illustrators as well as entertainment industry production art.

The Spectrum collections are edited by Cathy and Arnie Fenner, (who also did a wonderful job on the new Jon Foster book), and never fail to be beautifully designed books showcasing some of the best contemporary representational illustration to be found.

Unfortunately, the Spectrum site doesn’t include any preview galleries, although there is an artist list, that lists the over 300 artists featured in this edition.

In glancing through Spectrum 13, I was struck by how many artists that I’ve featured over time on lines and colors are represented in this latest edition, so I’ll use the lines and colors archive to give you a taste for some of the artists (though not necessarily particular works) you’ll encounter.

I don’t know how many of you have noticed that I’ve been using the Snap Preview Anywhere feature for the last few weeks, but it allows you to hold your mouse over the links on lines and colors to see a small visual preview of the linked page.

Every year, the Spectrum collection features a Grand Master Award, a special acknowledgement of lifetime achievement. This year it goes to Jeffery Jones.

Other artists (in no particular order) include:

For those interested in submitting an entry for the next volume, Spectrum 14, the deadline is a rapidly approaching January 27, 2007. 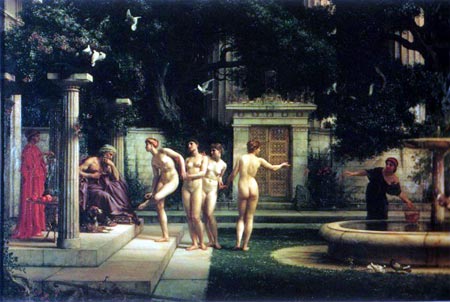