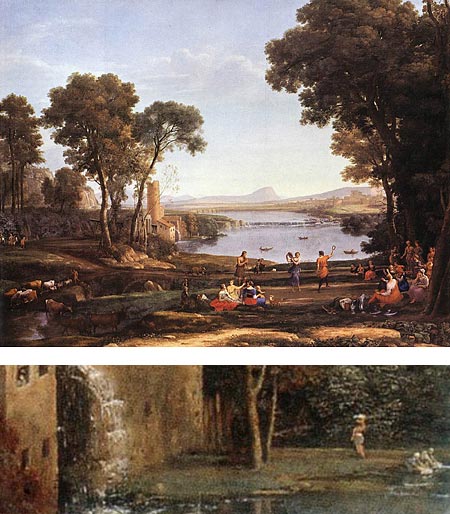 Landscape has always had a place in Western art, but it wasn’t until the 17th Century that it came to the foreground, so to speak.

French master Claude Lorrain is one of history’s great landscape painters. His name was actually Claude Gellée. He is better know by Lorrain, from Lorraine, the region of his birth, and is often simply called “Claude” (like “Elvis”),

He essentially created the concept of the “classical landscape”, a form that was to dominate landscape painting for over 200 years. Based on the Roman Compagna, the low-lying countryside around Rome, that was essentially littered with the ruins of classical structures at the time, classical landscapes are views that often contain elements of the architecture of antiquity and an attempt to present nature in an idealized way.

Lorrain really loved the actual study of nature, however, as revealed by his numerous detailed drawings and studies done from life, a practice uncommon until then. In both his paintings and ink and wash drawings, Lorrain is not only painting landscape but space, and the way both form and space are defined by light.

His earliest known work Landscape with Cattle and Peasants, is in the Johnson Collection here in Philadelphia in the Philadelphia Museum of Art.

To allow for the expectations of patrons at the time, Claude would soon populate his canvasses with gods and mythical events, but the figures were small in relation to their surroundings and you could tell it was really the landscape itself that was the focus of his interest.

Lorrain’s figures are almost like decorations for the landscape, in a reversal of the traditional role of landscape as a background for figures, as in the image above, Landscape with dancing Figures, sometimes called The Mill (large version here, detail here), of which he did two versions, the other being called Landscape with the Marriage of Isaac and Rebekah (large version here).

In fact there has been some suggestion that he would hire out the work of painting in the people in some of his paintings to other artists. The story goes that he would tell patrons he was selling them the landscape, and the figures were thrown in for free.

Lorrain became so popular, and his work so much in demand, that copies and forgeries of his paintings became a problem. In response, he created a remarkable book called Liber Veritatis (Book of Truth) containing almost 200 drawings, copies he made of his own works, catalogued by date and annotated with the name of the patron and the place where the painting was to hang, copies of which were circulated through the major art buying centers of Europe (and here you thought the whole copy protection thing was something new).

Lorrain was influential on generations of landscape painters, including greats like JMW Turner.

For those who live in the northeast of the U.S. there is an exhibition called Claude Lorrain: The Painter as Draftsman at the Sterling and Francine Clark Art Institute in Massachusetts, which runs from now until April 29, 2007. It then is supposed to move to the National Gallery in D.C. for a run from May 27 to August 12, 2007, but I can’t find a listing for it on the NGA site.

Although the exhibition features 13 of his remarkable oil paintings, it is the 90 drawings, many of them pulled form the great collection of the British Museum, that most interest me. These, to me, are Lorrain at his finest and most personal. Like Rembrandt, Lorrain loved nothing more than to immerse himself in the beauty of nature by drawing from life.