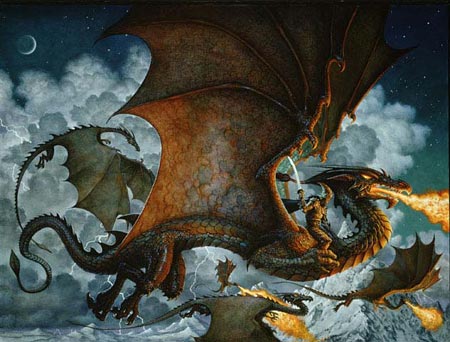 Every once in a while I just get the hankering for a good dragon painting. An artist who immediately comes to mind when I think of dragons, of course, is Don Maitz.

Maitz is a well known science fiction and fantasy artist who has been awarded the Hugo for best artist twice and also taken home numerous Chesley arwards and a Sliver Medal from the Society of Illustrators. His clients include Bantam Doubleday Dell, Random House, Watson Guptill, Harper Collins, The National Geographic Society and Joseph Seagram & Sons, for whom he has been the illustrator for their highly successful Captain Morgan Spiced Rum pirate character.

Maitz has made pirate imagery one of his specialties and you will find a pirates gallery on his site alongside the fantasy and science fiction galleries.

Maitz will often paint sketches and preliminaries in acrylic, but he works in oil for his finished paintings. His richly detailed images of other worlds and times are full of texture and lively color. His fantasy heroes, damsels and dragons tread on cold stone between rough barked trees and his futuristic worlds gleam with high-tech polymers and chrome steel. Maitz makes his otherworldly images vibrant with tactile details.

In addition to his illustration work, Maitz has worked as a conceptual artist on the Jimmy Neutron: Boy Genius feature film and the recent release Ant Bully.

Maitz is married to author/illustrator Janny Wurts, There is a site devoted to their collaborative works.

There have been two collections of Maitz’s work, Dreamquests: The Art Of Don Maitz, and First Maitz, which are unfortunately out of print, but you should be able to find them from Amazon and other used book sellers. His Pirates! 2007 Calendar is easily available and chock full of his grinning, attitude-filled pirates.

Maitz is also featured in Fantasy Art Masters, an excellent book about the work and techniques of ten well-known science fiction and fantasy illustrators including John Howe, Brom, Chris Moore and others. The wonderful dragon image above is prominently featured, along with preliminary sketches and color studies for it, and it was also the work chosen for that book’s cover.