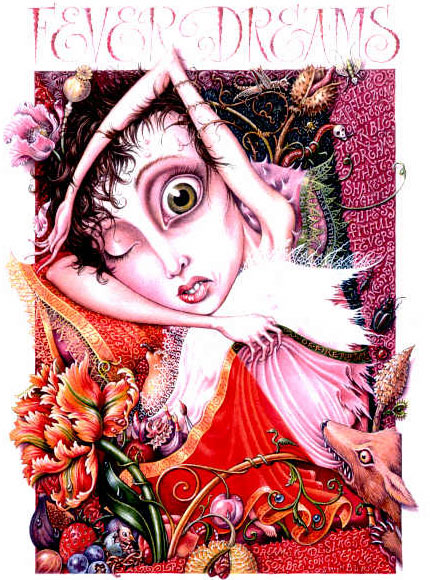 If that sounds like an insane combination, it’s wonderfully so, and her quirky, funny, highly textured, obsessively detailed, lovingly rendered and richly imaginative illustrations bear that out.

In addition to her mainstream editorial illustration an children’s book illustration, she has something of a specialty in the form of illustrations that are also visual puzzles. Done primarily for children’s periodicals, these are detailed images that combine her illustration and calligraphy skills with her fascination with brain teasers to create one-stop entertainments for the brain and eye.

You will also find “messages” in her other editorial work, like the “Fever Dreams” piece shown above. Included in the Illustration section of her site, she lists “Maniatures”, though she doesn’t include indications of the size of these, presumably small, expressions of visual mania.

The images on the site are just big enough to get some feeling for the intricacy and detail in her work, but can be a little small for appreciating the puzzles. Unfortunately, there isn’t a collection of her work yet that would allow us to see them together in print.

Also unfortunately, her web site is a bit of an unintentional puzzle at the moment. The imagemaps that provide the links for the main navigation elements on the left side of her site are flawed, and you can sometimes click on part of the section title and not get a response (and I can’t give you direct links because the site is in frames). Just move your mouse and try again, it’s worth the trouble.

Preiss has taken “curiouser and curiouser” as her motto, and her fascinating images can leave you curiouser for more.