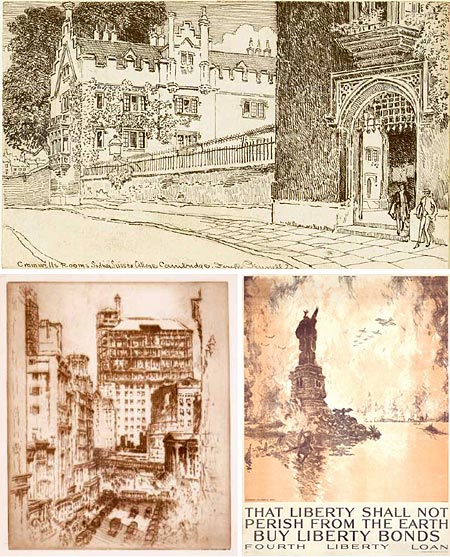 Some artists are drawn to nature’s raw and wild beauty, some to fantasies of other times or imagined worlds, but few follow Joseph Pennell’s fascination with the urban and industrial landscape of his time. He was more interested in a riverbank flanked by factories throwing columns of smoke into the air than one in pristine nature lined with willow trees.

Pennell was an american artist and writer. He was most renowned for his etchings. Born in Philadelphia, he studied here at the Pennsylvania School of Industrial Art and later at the Pennsylvania Academy of the Fine Arts; but, like his friend James McNeill Whistler, he was soon drawn to Europe. Pennell lived there from 1883 to 1917, when he moved back to the U.S. and settled in New York.

Pennell’s etching style is dramatically influenced by Whistler, which is a Good Thing, as Whistler, at least in my humble opinion, is probably the second greatest etcher in Western art, behind only Rembrandt. Pennell’s lines seem softer than Whistler’s, but both had an amazing ability to project mood, surface, light and atmosphere with their etched lines.

In Europe he drew the streets, buildings and factories of London and other European cities (image above, top), and, on his return to the U.S. did a remarkable series of etchings of New York city. Many artists might be overwhelmed by the visual complexity of the early 20th Century New York cityscape, with its beautiful buildings textured with ornate cornices, elaborate window ledges and hundreds of windows.

Pennell had a remarkable eye, matched by surety of hand, for reducing that complexity to a simple visual language that still retained the feeling of the complex within his deceptively simple rendering (image above, lower left).

There is a nice inexpensive Dover book of his remarkably evocative simplifications of the complexity of New York skyscrapers and city streets, Pennell’s New York Etchings: 90 Prints, and a less common book of Joseph Pennell’s pictures of Philadelphia, as well as books of his etchings of London, New Orleans and the the Panama Canal. (Unfortunately, many of the books linked here are out of print, but you may be able to find them with a little digging.)

This was at a time when photography was in its infancy and people could only see other parts of the world through the eyes of artists like Pennell.

Pennell is also the author of several books on illustration and pen drawing, particularly one I’m fortunate to have a copy of, Pen Drawings and Pen Draughtsmen. Their Work and Their Methods. If you can’t find a copy to buy, look for it in libraries.

Pennell was also an illustrator, perhaps most famous in that role for his World War II poster for war bonds (image above, lower right), which showed New York city under attack, and the Statue of Liberty engulfed in flames and smoke. [ Erratum: mark Morris has written to let me know that the poster was for World War I, not WW II. See this post’s comments. ]

One of the best sources I’ve found form Pennell images on the web is the site for the Philadelphia Print Shop, from which you can buy original Pennell etchings.