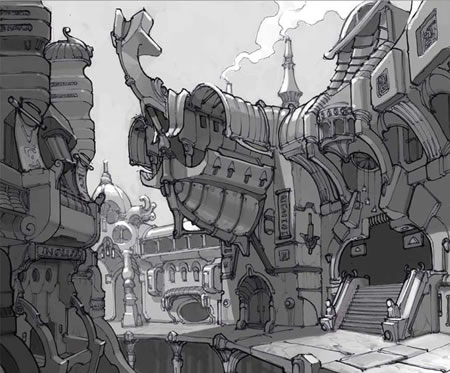 Khang Le is a concept artist working in the gaming industry. Aside from that I know very little. The “About” section of his site is another of the many I’ve encountered in which the information about the artist is “Coming soon”.

I do know that, in addition to this concept work, he has been a contributor to all three of the excellent Flight comics anthologies to date. You can see previews on the Flight site for his work in Volume 2 and Volume 3.

His web site has a small showcase of his concept work, industrial designs and character designs, accompanied by sections of traditional drawings, paintings and sketches. (I can’t give you direct links to the site sections because the site is in frames.)

The concept and character designs are fascinating, but there’s little indication about the project they belong to and I’m not familiar enough with the games involved to hazard a guess about which ones he’s worked on. I particularly like the drawings in which he uses touches of art nouveau in his backgrounds and settings, as in the image above from the “Industrial Design” section which is called “Drumstickville”.

There is also a good links list on Le’s site that mentions many concept artists that I’ve profiled on lines and colors.

Prior to embarking on his career, Le attended the Art Center College of Design in Pasadena. During his study there he and two other students, Mike Yamada and Felix Yoon, participated in a project with their instructor, Scott Robertson, in which they created design solutions for environments, props, characters, and vehicles for a retelling of The Skillful Huntsman, a Brothers Grimm fairy tale, and chronicled their work and working process. The result has been published as a book that serves as a glimpse into the process of concept design and the creation of concept art for the entertainment industry. (More info here.)

You can also find a selection of prints of Le’s work at the Nucleus Gallery.