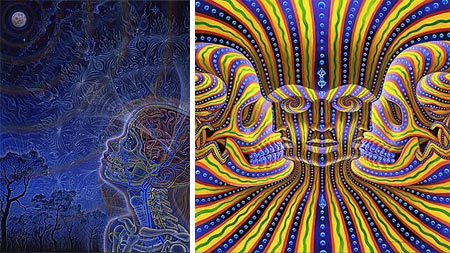 There is a history of visionary or mystical devotional art, perhaps more prominently in Aisian cultures than in the West. Alex Grey has taken influences from some of those traditional art forms, including tantric art, mandalas, thangkas and other sources of imagery from India, China, Japan and Indonesia, and combined them with a very Western representation of the human body in anatomical detail, to suggest the intersection of the natural and spiritual worlds.

Grey’s art has been called, visionary, spiritual and “psychedelic”, though he seems to prefer “transpersonal”. His intricate, brightly colored images often portray the human form as if the skin were transparent, showing the glowing lattices of the nervous and veinous system lying beneath, and sometimes the musculature, viscera or skeleton, as if trying to suggest a connection between our inner physical selves and our spiritual selves, and, through them, a connection to the cosmos as a whole in a visionary, spiritual sense.

The result is a wild amalgam of anatomical detail, brilliant, optically reinforced colors (lots of side-by side complementary colors for intensity), and the division of space into tessellations of op-art like patterns, visionary images like eyes and faces or sweeping radiant lines and lightning-like strokes of color suggestive of energy fields.

Figures are portrayed this way while praying, meditating, gazing at the stars, copulating, giving birth or even painting pictures.

Grey’s paintings, in oil and arcylic, are often quite large in size, which makes it all the more unfortunate that they are represented on the web in images too small to really get a good feeling for them. There are several collections of his work, including Transfigurations, Sacred Mirrors and Visions. He has also written a treatise on mysticism and art, The Mission of Art.

There is a video interview with Grey on YouTube in which you can see some of his work on gallery walls in its true scale.

The galleries on his site are divided into “Early Works”, “Sacred Mirrors” (a themed collection of several works, arranged in a special gallery called the Chapel of the Sacred Mirrors, which has it’s own site) and “Progress of the Soul”. I would start with the latter for an introduction to his work. (Sorry, I can’t give you direct links because the site is in frames.)

You will also find additional images in the Shop section of his site, particularly in the Posters and Prints sections.