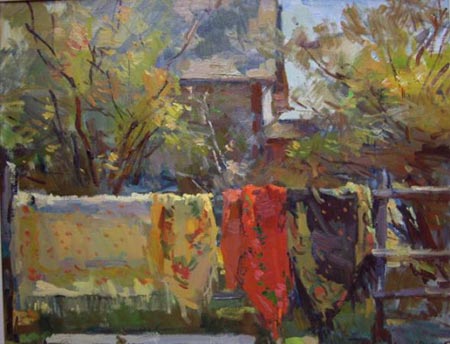 When I first wrote about Russian-American painter Sergei Bongart back in January of this year, I was disappointed with the small number of his works that could be seen online.

Happily, Patricia Le Grand Bongart, Sergei Bongart’s wife and an accomplished artist herself, wrote at the time to tell us that there was both a web site and new book devoted to Sergei Bongart in progress.

She has just written again to tell us that the new web site is up, and the book on his painting method, Sergei Bongart …touched by the gods, is now available.

In addition to the new book, there is a video of Patricia Bongart demonstrating the Bongart Method and an audio CD of Sergei’s classroom lectures (apparently in a fairly heavy accent).

The new web site features a gallery with about 60 works, including some by Patricia Le Grand Bongart. Of the works by Sergei, there is a wonderful variety, including life drawings and travel sketches in addition to his brilliantly colored landscapes and still life paintings.