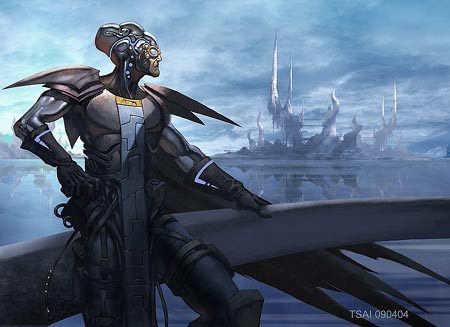 Francis Tsai was trained as an architect, but now works as an illustrator, concept designer and visual development artist for the gaming industry.

His website, TeamGT Studios, which he shares with architect Linda Glaze, contains a portfolio of his illustration, concept design and “other stuff“, which includes sketches, experiments and life drawings.

Tsai appears to work primarily digitally, and there are images in the portfolio of character designs, creatures, vehicles and environments in various stages of rendering and finish.

Tsai also maintains a sketchblog on which he posts images and sketches, and comments on techniques and works in progress.

There is also a section of “Basic Tutorials” on his web site which includes basic instruction in 2 Point Perspective and Casting Shadows in perspective, as well as the more expected demos on character painting.

Tsai has also had tutorials published in ImagineFX magazine (which I wrote about here), and he will sometimes make a reprint of a tutorial available from the blog as images, or send you to a link for a PDF version from the ImagineFX site. The tutorial linked to here is for a painting done in ArtRage, the simple and very inexpensive ($20) digital painting program from Ambient Design.

Tsai has been blogging since November of 2005, so there is a good bit of stuff in the archives, including nice straightforward travel sketches. In addition, his blog sports a good blogroll of other art blogs, with an emphasis on concept artists.

Tsai draws great robots and is one of the contributors to Keith Thompson’s fun how-to-draw book, 50 Robots to Draw and Paint, and also contributed to Chris Patmore’s How to Draw Fantasy Females.