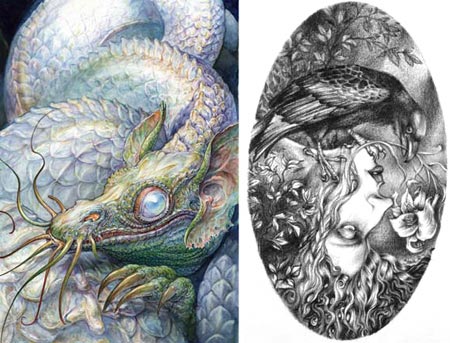 The tongue in cheek “Who are we” section on their site provides little information of real use, except that Omar is of Middle-Eastern descent (could we have guessed?) and is allergic to yaks (always good to know). I was also able to glean from the provided photograph that they have, or personally know, a horse.

In addition to childrens’ book illustration, to my eye influenced by the terrific work of Arthur Rackham, among others, Omar’s gallery features some commissioned works and a series of “portraits” of individuals with large demonic horns.

A little digging shows that Omar’s clients include Aladdin Books, Hyperion Books, Holiday House and Spider magazine and has won a Spectrum Gold Medal. You can find some of the books he has illustrated on their links page or on Amazon.

Sheila’s gallery features an array of fantasy subjects and amusing grotesqueries, intricately rendered in pencil. Sheila’s work has also been featured in the Spectrum annuals and both artists have been nominated for the Chesley Award; though they haven’t brought it home… yet.

Correction: Omar did win a Chesley. In 2005 he won the award for artistic achievement.