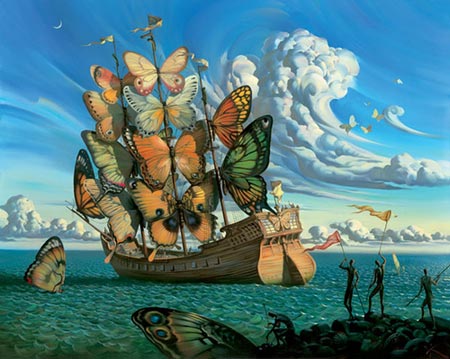 Vladimir Kush is a Russian painter who studied at the Moscow Art Institute and is now living in the U.S. He works in a vein of fantastic art obviously influenced by Surrealists like Dali and Magritte, but with a distinctly different emotional context.

His paintings have something of a visionary mystical quality and many of them feature recurrent themes like butterflies, sailing ships, fruits and other natural forms, and visions within cloud formations.

His images often deal with interesting combinations of visual elements. Sailing ships are masted with stalks of gladiolus, their blossoms unfurled as sails. Giant butterflies catch the wind on another ship (above), or form the blades of fantasy windmills. Giant mechanical fish and dragonflies and a monumental rhinoceros undergo maintenance. The rising sun is revealed to be the yolk of a giant egg or the pearl of an oyster. A half pear is envisioned as a lute, and a half apple as a butterfly. Through many of the works, beautifully stylized and textured clouds roil and tumble revealing visions of seas and harbors or taking on forms like hot air balloons.

Unfortunately, the images on Kush’s own web site are too small to get a real feeling for his paintings. Fortunately, his work is represented on the web on the sites of galleries that carry his prints or originals.

There are print collections of his work, but I’ve had trouble establishing their availability (it may be primarily through galleries rather than traditional book sources). One is called Metaphorical Journey and seems to be pricey ($200) as a used book on Amazon. On the books page of Kush’s site two other titles are shown, The Bronze Drops of Time and Journey to the Edge of Time, which is apparently new and more readily available.

Journey to the Edge of Time isn’t a collection, per se, but a coffee-table science fiction book, arranged as diary with many of Kush’s paintings as illustrations. The authors are Oleg Kush and Mikhil Kush, though I don’t know their relation to Vladimir.