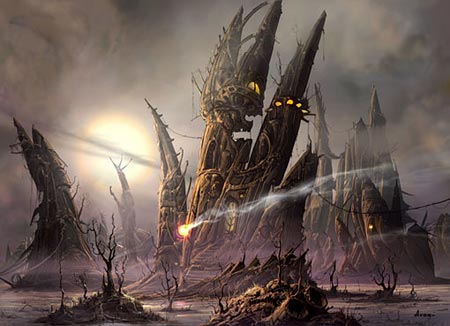 (Image above © Wizards of the Coast)

English fantasy artist John Avon is one of many in his field who have made the transition from traditional media like oil and acrylic to digital painting. In the section of his site devoted to biography and technique, he goes into more detail than most about the reasons for his choice and the advantages he sees in painting digitally, particularly in a field based on creating complex paintings on deadline.

In addition he goes into some detail on his basic working process, and also mentions some of his favorite artists in the field, including Todd Lockwood, Kev Walker, Daren Bader, Mark Zug and Donato Giancola, concept artist Anthony Waters, and comic book artists Glen Fabry and Carl Critchlow.

Avon counts Wizards of the Coast as his largest client and has been doing illustrations for their fantasy themed Magic: The Gathering card based game for a number of years. The galleries on his site showcase his paintings for the project going back 12 years. The paintings are arranged by year, which also organizes them according to the game module for which they were created.

Avon uses the digital painting tools in Photoshop and Painter to paint richly detailed, highly rendered images of environments, monsters and magical objects, imbuing each with atmosphere, color and drama. He very often utilizes the technique of casting an image in an almost monochromatic light, with brilliant accents of another color to create contrast and focus.

His landscapes, structures and objects are wonderfully imaginative and, even within the fantasy theme of the Magic: The Gathering projects, often take on an other-worldly science fiction feeling; suggesting that magical realms might resemble distant planets, and perhaps vice-versa.