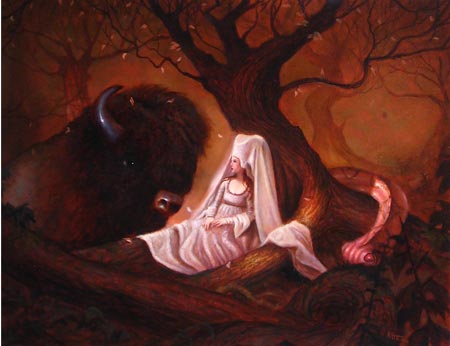 Here we go again, another intriguing young (I presume) illustrator who provides little background information on his own site, so I’ve dug around for what I could find.

He works in oil for his illustrations, but likes to work in digitally for some pieces, and has a gallery on the CGSociety site. His clients include Wizards of the Coast, UpperDeck Entertainment and Green Ronin Publishing.

He also does work for Fantasy Flight games, including the cover for the Grimm roleplaying game for which there are discussions of his working process in the form of PDF files here and here.

Altmann divides his time between illustration and gallery work and exhibits at the Roq la Rue gallery.

Altmann’s web site, which is subtitled “Illustrations and Hauntings”, has sections for Illustrations, Sketches and Personal Work. He has a blog called Bad Dreams Good Nightmares..