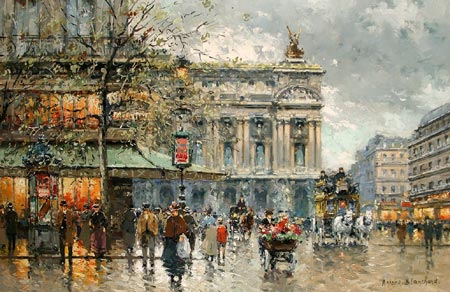 Antoine Blanchard was not a major figure in French painting, and it might be easy to dismiss him as formulaic, but I think his appeal goes beyond the obvious superficial charms of his paintings and his work is most interesting for the elements that you don’t notice at first.

Blanchard’s paintings seem almost calculated for appeal in some ways. They are usually of Paris street scenes and very often include famous landmarks. They employ repetitive themes and similar composition. You can often find two, three or more versions of the same scene that at first glance look almost identical, but on closer inspection reveal themselves to be alternate versions. This is not an uncommon practice for artists (see my post on Gilbert Stuart), but in Blanchard’s case may be the result of a desire to paint a different time, as preserved in the relatively new technology of photography.

Blanchard’s Parisian avenues are thronged with pedestrians, parading past shop windows alight with bright yellows and oranges. His shop windows and lighted cafe fronts seem intended to stand out like jewels in sharp contrast to the blue-grays or muted siennas of his backgrounds. Though he employs short, painterly brush strokes and in some respects seems very influenced by the Impressionists, his brush handling is more graphic, with less intention for optical blending, and his use of light is decidedly different.

In marked contrast to the Impressionists’ pursuit of sunlight and its effects, Blanchard seeks out gray, overcast, rainy or snowy days. His gray skies and subdued backgrounds are a stage for the bright lights of his cafe, shop and streetcar windows. His repetition of these themes can again be seen as formulaic, but it isn’t the high chroma accents, meant to immediately attract the eye, that appeal to me in Blanchard’s paintings; it’s actually his backgrounds that I enjoy most.

His dark, overcast skies are painted with wonderful painterly suggestions of the shifting layers of rain clouds, at times dense and heavy with impending rain, at other times broken with hints of blue, indicating that the rain that turned the streets into shimmering mirrors has passed. His buildings, too, though obviously meant to play background to his brightly colored passages, are of more interest than his foreground subjects, with a marvelous economy of notation in which complex architecture is reduced to a few elegant brush strokes.

Blanchard was born in a small village and studied in Rennes at the Ecole de Beaux-Arts there, followed by study at the Ecole de Beaux-Arts in Paris, a city that would be his major source of subject matter. His career was interrupted by the 2nd World War and later by the death of his father, which compelled him to take over administering the family business. When he later returned to Paris, and to painting, he found himself nostalgic for a more idealized past and began to paint using images he had collected of Paris in La Belle Époque, particularly the 1890’s.

His work seems strongly influenced by Édouard Cortès, a contemporary of Blanchard’s who is better known, and who employs similar themes of overcast skies and darkened Parisian streets punctuated with warm artificial lights. The tenor and tone of the two artists’ work, however, their handling of light and dark, their brushwork and choice of color range is very different. Their intention seems different as well. Cortés shows us his contemporary Paris bustling with early 20th Century automobiles and electric lights. Antoine Blanchard lets us walk back with him through the leisurely Parisian streets of a more relaxed and romantic time.