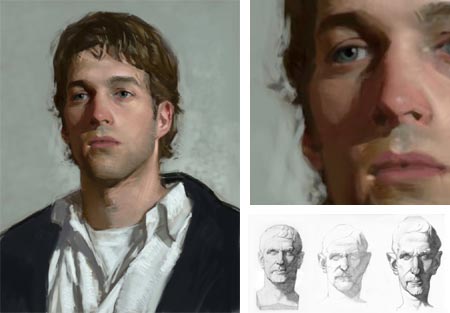 Jamin LeFave is another of those artists about whom I can find little information, but whose work is fascinating. LeFave has a blog, but apparently does not have a gallery-type web site. His brief bio paragraph indicates that he is a concept and production artist working for an independent gaming company called Wahoo studios, but I don’t think any of his professional work is available on the web.

Instead, LeFave’s blog focuses on his studio painting, teaching work and experiments in oil, acrylic an digital media. When I came across his blog I was immediately struck by a self-portrait painting in progress (above, left and detail, top right), with its combination of straightforward realism, fresh handling and solid draftsmanship.

I went on to find a series of strong portrait studies, both paintings and drawings, as well as other items from his sketchbooks and classes. LeFave teaches illustration at Utah Valley State College.

One of the items I found particularly fascinating is his post about a drawing exercise he does (image above, bottom right), in which he starts with a drawing from reference, in this case from a cast drawing in a Charles Bargue Drawing Course book. He follows his original drawing in a day or two with another drawing of the same image from memory only. LeFave says the he knows the memory drawing is done when he can’t remember any thing else to draw. He then uses his memory drawing for reference, and redesigns it as a looser, more exaggerated drawing with a playful exploration of the forms. He can then go back to the original for reference and add interesting details. This is an exercise I haven’t encountered before, and it sounds like a great way to build your powers of observation and explore the drawing methods of other artists.

LeFave’s blog has only been established since last November, and he doesn’t add to it often, but I’m looking forward to seeing more of his work in the future.