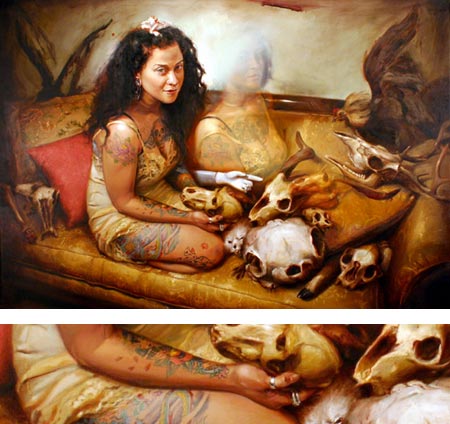 I’ve featured tattoo artists on lines and colors (like Regino Gonzales), but I found it particularly fascinating that gallery artist and illustrator Shawn Barber has painted a series of portraits of individuals with tattoos, with a particular interest and emphasis on the tattoos.

Often, in fact, he will focus on just hands or other body parts that are tattooed, in effect painting a portrait of the person through the vehicle of the tattoos they have chosen. The series also includes paintings of tattoo instruments and close-ups of hands involved in the action of applying tattoos.

The paintings are in a crisp, immediate, realist style, sometimes left to rough edges in places, or posted in an incomplete stage, which I always enjoy. The idea of painting tattoos enters into the interesting area of artists painting their interpretation of another artist’s work.

Barber also has another extensive series, I believe painted prior to the tattoo series, on the subject of baby doll heads. Most of these paintings are large scale, many are roughly 5 feet (152cm) high.

Barber is also an accomplished illustrator, with clients that include The New Yorker, Rolling Stone, Atlantic Records, The Washington Post and many others. His personal work has been shown in numerous solo and group shows and his illustration has been featured in articles in ArtNews, The Artists magazine, Juxtapoz and Communication Arts.

He likes to keep his personal work separate from his professional work, both in terms of intent and stylistically, though his portfolio on the Magnet Reps site has a mix of both. His own site contains mostly personal work, primarily the two series mentioned above, but the gallery is a somewhat awkward “roll-over to view” setup that requires you to keep your mouse stationary over a thumbnail to keep the corresponding image in view. The portfolio on the magnet Reps site is easier to view, but doesn’t contain the most fascinating and striking of his images.

His personal site also contains an interesting FAQ, in which he talks about his schooling and artistic development, gives advice to younger artists, and lays out his strongly held opinions on a number of subjects relating to art and illustration.

In addition to gallery painting and illustration, Barber has lectured and given painting demos at several universities and art schools, including the Ringling School of Art and Design, where he received his BFA,. He is currently a Professor of Illustration at the California College of Arts in San Francisco.

Barber is working on a second series of tattooed portraits, and is now in a tattoo apprenticeship with tattoo artist Mike Davis of Everlasting Tattoo in San Francisco.

A collection of his paintings, Tattooed Portraits: New Paintings by Shawn Barber, was published in 2006.

Note: The Shawn Barber site contains images that are NSFW and may be offensive to some.