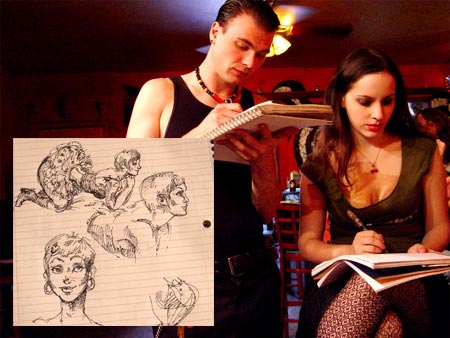 Hey all you non-artists: want to know a secret? Shhhhh! Don’t let this get out, and I hate to spoil any idyllic illusions you may have, or that your artist friends have encouraged you to have, but… drawing nude models isn’t particularly sexy.

There, I said it. Don’t look at me that way! It’s true. Hey, I promise you I’m a healthy, red-blooded, heterosexual male, and some of the models I’ve drawn over my years of attending life drawing session have been astonishingly beautiful women; but when I’m drawing them, sexy is not the operative word. Not that you can’t make sexuality, and the physical appeal of an attractive model, part of a drawing, but you actually have to work at it.

I discovered this, much to my amazement, as a teenager (talk about healthy and red-blooded), when I first started to attend life drawing classes in art school. My fellow male freshmen and I were looking forward to the first life drawing class, our tongues prepared to hang out of our mouths in leering anticipation, as much as the freshmen girls were undoubtedly prepared to look down their noses at us at the first sign of impropriety; but the school cooled our jets with somewhat unattractive (but actually quite good) models for the first few sessions.

Eventually, though, the session came when we were presented with a very attractive young woman to draw; but, after about 6 seconds of leering, we found ourselves caught up in the process of drawing, as we had been in the previous sessions, and only realized at break time that we had been drawing a beautiful young woman for half an hour and it didn’t matter!

Part of it is the setting, of course; art schools and professional artist organizations that sponsor life drawing sessions know how to keep things professional and straightforward, and so do experienced models and most artists with any life drawing experience. It’s more than that, though, it’s the fact that the act of drawing involves a different way of seeing.

I found, even as an easily, um… excitable teenage boy, that once you start drawing a person, even a very attractive naked person, you are no longer seeing in the same way. Though you know intellectually that you are drawing a woman, and can be cognizant of the fact that it’s an attractive woman, that’s not what you’re seeing. When you’re drawing, you’re not seeing a shoulder or a breast, as much as your seeing shapes, angles, curves, lines, juncture points, shadows, intersecting forms and complex spatial relationships. All of these things go together to make a drawing of a person, but you’re not looking at that person the same way when you’re drawing as you would be under other circumstances.

I would venture to say that the same applies to women drawing attractive men, or people who are attracted to those of their own gender; the principle is the same. (I’ve found in my years of drawing, though, that male models are scarcer then female, and tend not to be as good at it. It may be that women are more conscious of how to exert subtle control over their bodies in holding a pose, or it may simply be that fewer men are willing to deal with the fact that life modeling is much harder work than it seems, and the pay is usually terrible.)

Yes, as I mentioned, you can inject sensuality and sexuality into the drawing, but it’s actually hard work. You have to consciously shift slightly out of your drawing mode of seeing/thinking far enough to see the model as an attractive person, but not so far as to lose that precious seeing state in which you can draw effectively. Some think of this mental adjustment in and out of a drawing mode of seeing as a left-brain, right-brain shift (see my post on Drawing on the Right Side of the Brain), which may or may not be scientifically correct, but it’s basically a move from the usually dominant verbal/logical mode to the harder-to-access visual/spacial mode that lets you see what’s in front of you without interference from verbal-brain chatter.

I eventually learned, though, when drawing a woman I was involved with, in private, it was, of course, much easier to put the sexual component back in (though drawings would often go unfinished…); and the professional art school or artist organization setting actually does have a lot to do with keeping it dry and unsexy.

So the question arises, why not something in between? Why not have an occasional setting in which the professionalism of art school is tinted with a bit of naughtyness to put the “sexy” back in drawing sessions?

That’s the idea behind Dr. Sketchy’s Anti-Art School, brainchild of illustrator Molly Crabapple (seen above sketching with “helper art-monkey” Steve Walker, along with her sketch of the session, inset). Crabapple “draws saucy Victoriana for magazines” and used to work as a life model when she was in art school. Her boredom with posing for those classes prompted the creation of Dr. Skecthy’s as a series of sessions that combine drawing with a bit of burlesque and theatre.

As models, she searches out, in her words, “the most beautiful burlesque dancers, the most bizarre circus freaks, and the most rippling hunks of man”, and hosts drawing sessions on every other Saturday in Brooklyn. The sessions are often punctuated with a bit of theater, silly drawing contests (best incorporation of a woodland animal, best left-handed drawing), prizes and drinking. The Brooklyn Dr. Sketchy’s sessions take place in a bar/restaurant called the Lucky Cat Lounge

The sessions are three hours, like many life drawing sessions; but, though the stated goal is to answer the question “Why can’t drawing naked people be sexy?”, the models in this case are actually not nude. This is due to the fact that New York has an ordinance prohibiting nudity and drinking in the same room. The models pose in sexy costume and are selected on the basis of “being heart-stoppingly gorgeous, possessing a unique talent (trapeze, contortion, sword-swallowing, burlesque), or extraordinary costumes”. The models are also paid better than in normal life drawing sessions and, very much unlike art school sessions, can receive tips. You’re beginning to get the picture, and Dr. Sketchy’s Anti-Art School bills itself as “what happens when cabaret meets art school”.

The brooklyn sessions apparently fill up fast and the seating is limited. You can reserve a table early for an extra fee. The schedule is here. The Dr. Sketchy’s sessions have been so successful that they have expanded to other cities and there are now over 20 locations. The Dr. Sketchy’s site has even posted a “How to start a Dr. Sketchy’s” page. There is a board where participants can discuss the sessions and post their work. There is also a photoblog, and a few short videos, including a “trailer” done up the scratchy black and white style of Reefer Madness, about “depraved students driven mad by art”. There is also a Rainy Day Coloring Book available, and Dr. Sketchy’s is accepting submissions for their first annual Anti-Art Show.

Obviously, this is not the venue for serious minded study of figure drawing, and is different from regular figure drawing sessions in other respects (no easels, no oil-based or other “messy” media, though watercolor is OK), but it looks like a fun alternative to the usual unsexy life drawing sessions most artists are used to. Plus you’re allowed to leer at the models. Too bad they didn’t have Dr. Sketchy’s when I was a teenager.

Note: the Dr. Sketchy’s site should be considered NSFW (depending, of course, on where you work).