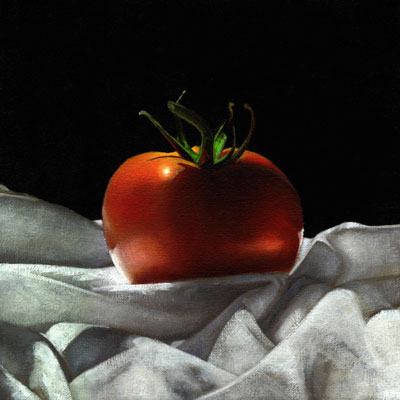 As I pointed out in my post on Chardin, still life is a branch of painting that doesn’t get the respect that it deserves, even though it has remained a staple of gallery art for centuries, and continues to be a popular area for contemporary artists.

Still life may, in fact, be gaining ground in certain circles, particularly among those engaged the the practice of “painting-a-day” that I’ve been reporting on over the last year and a half. The immediacy and availability of subject matter lends itself well to the practical realities of that discipline.

For all of that, in the eyes of many, still life remains the chartered accountant, librarian and legal secretary of painting subjects — useful, but dull. Perhaps cast drawing is thought of as slightly less exciting.

However, in the same sense that “Beauty is in the eye of the beholder.”, excitement in a painting subject is in the eye and mind of the artist. I’m reminded of this whenever I look at the still life paintings of James Neil Hollingsworth, who I profiled in May of last year. Hollingsworth is an Atlanta based painter who has an uncanny knack for finding and portraying visual drama in the most humble of subjects.

Look at this wonderful painting of a single ripe tomato. Even within the limits of a square format (in itself a challenge), Hollingsworth has placed his subject dead center, which usually deadens a composition, and managed to build a swirling yin-yang of dark and light around it, roiling the shadows of the tablecloth’s folds like waves or a mountainous landscape, and using the dark background and backlit modeling of the tomato to push it into high relief.

The tomato itself is an instruction manual in the dramatic use of light and shadow to define a spheroidal form, and a textbook for the use of ambient, local and reflected color. Just look at the stem, simultaneously revealed and hidden as if it were the edge of a dark forest, bits of cast shadow reinforcing the roundness of the tomato’s form, and defined with magically lost and found edges, as in the body of the tomato, where dark touches dark and light touches light, areas where a less confident painter might feel compelled to always force sharp contrasts of light against dark to define an edge.

In addition to placing the subject in the very center of the composition, the horizon created by the tablecloth and background is almost vertically centered, the dark and light areas are almost 50-50, and the viewing angle is straight on. Hollingsworth manages to take all of these Composition 101 no-no’s and spin them into a little wonder of theatrical lighting and brilliantly focused color.

I doubt very much that the artist was thinking that way when composing the piece, he was probably just thinking “I’ll paint a tomato.” and let his eye, trained over years of finding the drama in simple subjects, do the rest.

Since I last wrote about Hollingsworth, he has added to his online galleries, with considerable new work in the Still Life gallery, and a new series of “Six by Six” paintings of which the image above is one. You will also find his older series of transparent and reflective objects, of which I am particularly fond, as well as several other categories of subject matter.

Hollingsworth now has a blog, Paintings in Oil, on which he displays his most recent work and discusses his process. Neil Hollingsworth is married to Karen Hollingsworth, who I profiled here, another strong painter with a terrific grasp of visual drama within subjects normally seen as subdued (check out her “Windowscapes” and “Roomsapes”).

As much as I like many of Neil’s various categories of subject matter, I keep coming back to his simple, intimate still life paintings, their subjects dramatically unveiled as light pours over them like honey.

So to the age-old question, “Where do I find a dramatic painting subject?”, the answer, if you’re Neil Hollingsworth, is “almost anywhere”.