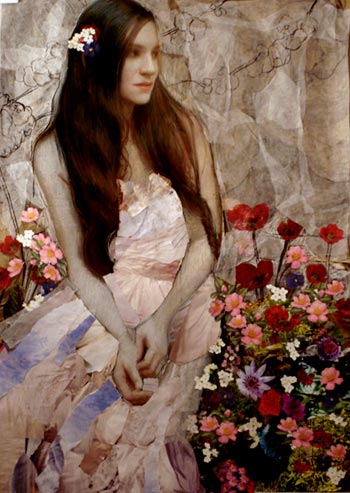 When I was a teenager, I used to amuse myself by making pseudo-Surrealist collages, painstakingly cutting images out of magazines and pasting them together in whatever jarring juxtapositions my fevered little brain could cook up. This was pre-Photoshop, and the ease of digital image manipulation has rendered that kind of collage a bit moot.

Marshall draws/paints pastel portraits and incorporates them into composition in which they are surrounded by, and intertwined with, elements of collage, apparently taken from magazines and other sources. Her portraits are usually of women or girls, sometime formal, sometimes very casual, and feature large areas which are, in essence, rendered in collage. By that I mean that the collage elements are used as textures, patterns or areas of color and detail to suggest a dress, a bedspread, or part of a background, the way a painter might employ stipple or scumbling as a technique to accomplish similar ends.

Her portraits, though occasionally given the name of the sitter, often have interesting names like “Connecticut Could Never Quite Contain Her” and “Weddings Bored Her, Even Her Own” (image above).

I get the impression that, as fascinating as they are in photographs on the web, Marshall’s works probably suffer more than most from the limits of photographic reproduction due to the physical nature of collage, and would dramatically benefit from being viewed in person.

Those in New York can see her work as part of a two-person show, along with Matthew Wood, at The Gallery at Lincoln Center in the Concourse Level of the Metropolitan Opera House in Manhattan from now until June 30, 2007.