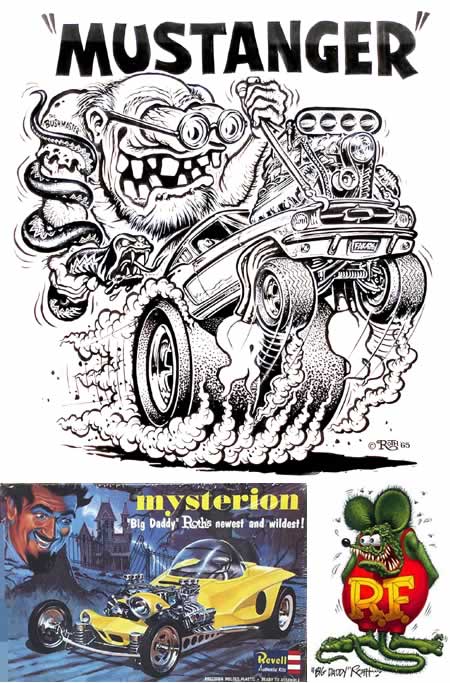 At some point in my impressionable youth, I was exposed to certain “corrupting influences” that twisted my little brain into a fevered pop culture pretzel and made me not only want draw comics and cartoons, but draw outrageous and weird comics and cartoons.

One was my discovery of paperback reprints of E.C. Mad comics from the 1950’s with the hilariously subversive art of Wally Wood, Will Elder and Jack Davis, and another was the outlandishly exaggerated, lurid and over the top monster and hot rod car art of Ed “Big Daddy” Roth.

Roth was one of the seminal figures in the “Kalifornia Kustom Kar Kulture” of the early 1960’s. Roth was into the creation of hot rods and customized show cars, particularly using the amazing new wonder material of fiberglass, that enabled him to design free form bodies for his cars instead of just cutting into existing metal bodies.

To support the investment necessary for his obsession, Roth would use an airbrush to draw outrageous cartoon monsters and grotesquely exaggerated cars on T-shirts at car shows and drag races. These were the drawings that turned my tender little 12 year old brain into glowing orange gook when I saw them.

Wonderfully grotesque monsters, extended tongues dripping saliva as they trailed in the wind, bloodshot eyes bulging from their distended craniums, usually with one ungainly arm extended to crank on an improbably long and weirdly curved gear shift lever, drove nitro-burning hot rods with gleaming chrome plated engines extending through their hoods, exhaust pipes spewing white hot flames and smoke pouring off of enormous tortured racing slicks as the cars lifted themselves in eternal wheelies, feverishly screaming down Hell’s drag strip to some kind of dramatic reward or explosive oblivion. Wow.

It’s hard to overstate how bizarre and anti-establishment this kind of stuff was at the time Roth was working, because all of this lowbrow art, outragrously grotesque creatures and characters in films and concept art, underground comics, 60’s psychedelic art and album covers, MTV-style in-your-face TV rock, grunge and punk culture, and general acceptance of wild, anti-authoritarian behavior as acceptably rembunctious, that we take for granted as part of modern pop culture, didn’t exist yet, with the exception of certain bastions of outrageous art like the aforementioned 1950’s Mad comics and E.C. horror comics, which were certainly an influence on Roth’s cartoons. Most of the country was still wrapped in the warm but rigidly controlled Leave it to Beaver and Ozzie and Harriet delusions of the 1950’s up until 1964 or so, when “the 60’s” started to shake things apart.

Roth’s images became tremendously popular and one of his characters, the Rat Fink (image above, lower right), became a cultural icon. Roth was able to parlay his images into licensing deals for T-shirts and decals, along with merchandise like the Revell model kit versions of his show cars. He became successful enough to employ other artists, like Ed Newton and Robert Williams, to produce art for him.

For a fascinating glimpse into this Kustom Kar Kulture of the early 1960’s see Tom Wolfe’s wonderful essay The Kandy Kolored Tangerine Flake Streamline Baby. Though it features George Barris a bit more prominently than Roth, in it, Wolfe makes the insightful observation, with which I agree, that these custom cars were so radical and free form in their curvulinear molded fiberglass bodies and half inch thick hand-rubbed layers of translucent lacquer, that they transcended mere automotive customizing and ascended into the realm of modern sculpture.

Roth’s cars went well beyond the “normal” (if such a word can apply to the custom car culture at all) customs that had been hot rodded, painted and perhaps chopped and channeled (had their roof lines lowered and bodies set lower on their chassis). “Beatnik Bandit”, for example, didn’t mess around with a chopped top or cut-out roof panels, but sported instead a bubble top, a transparent hemispherical dome that looked like it had been plucked off of a cartoon flying saucer, and featured a joy stick steering control. The bubble top was carried on to some of Roth’s other Kustom Kreations, like the Mysterion, which looked like it might have been jointly designed by Syd Mead and Richard Powers (image of the Revell model kit box cover, illustrated by another artist, above, lower left).

These fantastic sculptured cars by Roth, George Barris, Bill Cushenberry and Darryl Starbird, along with the the pinstriping and car body airbrush art of Von Dutch, and Roth’s outrageous monster car T-shirt and decal art, were the beginnings of the modern lowbrow/outsider art phenomenon known as “pop surrealism”.

Roth is now talked of as the Andy Warhol of lowbrow art/pop surrealism (though I prefer Wolfe’s comparison to Dali), a banner held high by Robert Williams, who, after working for Roth for some time, went on to be one of the more influential underground comix artists of the mid-sixties (and one of my favorites), eventually founded Juxtapoz magazine and became a central figure in lowbrow art circles.

Along the way Roth’s influence helped establish a demand for car culture comics, notably CARtoons and Drag Cartoons from Peterson Publishing, in which Roth was occasionally a character, and which featured artists like Mark Millar, Gilbert Shelton, William Stout and Alex Toth (some of Toth’s car culture work is available in a book called One for the Road from Auad Publishing). You can add these to the list of comics that helped distort the part of my brain that takes demented glee in outrageous comic art.

Ed Roth is currently in the spotlight in the form of an exhibit of 17 of his original pen and ink drawings (some of which look like they have Williams’ touch) for T-shirts and decals at the La Luz de Jusus Gallery in Los Angeles, which runs from now to July 1, 2007. Juxtapoz has an article and photo essay on the show’s opening.

Unfortunately the “official” Big Daddy Roth site is less than cherry, but there are other resources available.

There is a collection of his art, Rat Fink: The Art of Ed “Big Daddy” Roth by Douglas Nason, Greg Escalante, Doug Harvey, and he is featured prominently in Kustom Kulture: Von Dutch, Ed “Big Daddy” Roth, Robert Williams and Others.

There is a documentary film about Roth, Tales of the Rat Fink (official site here), by Ron Mann (who also made Comic Book Confidential).

You can see my own little tribute to “Big Daddy” Roth in this page and this page from Argon Zark!, my webcomic; which carries more than than a little of his influence.

Link to gallery exhibit via BoingBoing