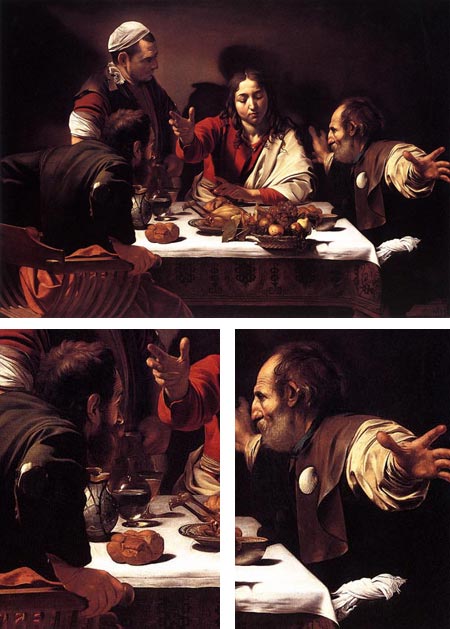 A. One of the greatest painters in the history of Western art

B. A rebellious upstart who defied the conventions of religious painting, alienated patrons and incensed the church

C. A master of chiaroscuro, the dramatic contrast of light and dark, perhaps matched only by Rembrandt

D. A master of foreshortening, the difficult representation of the body or limbs from end on, possibly matched only by Michelangelo Buonerotti

E. A bragging, swaggering show off who specialized in dramatic, violent scenes of fights, struggles and particularly beheadings, one of which featured his self-portrait as the severed head of Goliath

F. One of the most respected and envied painters in Rome at the beginning of the Baroque period, and a tremendous influence on other artists

G. Largely forgotten in the centuries following his death until “rediscovered” in the 20th Century

H. A violent, irresponsible, brawling miscreant, who went looking for fights and was arrested and imprisoned for multiple assaults, one of which resulted in the death of his opponent over a disputed game of court tennis and forced him to take it on the lam for several years until pardoned by the Pope

I. All of the above.

Well, whatever else you may say of him, one thing stands out about Caravaggio: this guy could paint!

Look at his famous painting of the Supper at Emmaus (image and details, above). This is no glossed over, idealized religious scene, aglow with the unreality of poetic divinity, this a real scene with very real figures.

Everything here is tangible, and rendered with the kind of palpable fidelity to life that got some of Caravaggio’s other works rejected as vulgar and secular. Look at the disciple’s hand on the chair in the foreground, the “instant in time” position as that figure is about to rise, the outstretched hand of the beardless figure of Christ and other disciple’s hands extended into space, suspended toward or away from us in dramatic foreshortening, the rich, dark shadows, against which the whites of the cloth pop forward, the tactile physicality of the food and plates on the table, rendered with as much care and emphasis as the figures themselves, the odd way one disciple’s elbow and the other’s fingertips are cut off by the edge of the canvas, and the striking realism of the faces, more portraits than idealized figures. What a tour de force of painting skill. What a show-off. What a painter!

Though I can’t say I was unequivocally thrilled with last week’s showings of the PBS series The Power of Art (see my previous post), I will say that they were interesting and thought provoking and for that reason worthwhile. Tonight’s program will be on Caravaggio (10PM on most PBS stations), and it will be interesting to see which of Caravaggio’s faces the program chooses for its focus.

There are many angles by which to approach Caravaggio; he was a pretty remarkable fellow in more ways than one. Take your choice.

Link: The Power of Art: Caravaggio
The Supper at Emmaus at the National Gallery, London
David with the Head of Goliath and other Caravaggio at Galleria Borghese
The Athenaeum (66 works)
Humanities Web
CGFA
WebMuseum ARC
Cuidad de la pintura
Artcyclopedia (links, museum listings and resources)
Books on Amazon
My previous post on Rembrandt vs. Caravaggio