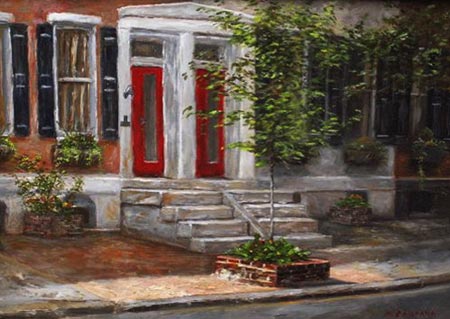 Some landscape and cityscape paintings have a distinct sense of place. There is a certain appeal to paintings with subjects that are exotic and imply the romance of travel, for those of us in the U.S. that might be exemplified by images of Venice or Paris.

There is also a strong appeal, however, in the near and familiar, and many artists will devote them selves to the portrayal of the areas near where they live, finding resonance with those who have familiarity and identification with the places pictured.

Mark Campana is a Philadelphia painter who covers a range of subjects, but I particularly enjoy his depictions of houses, streets, cafes and shops in the areas of Center City (what those of us in Philadelphia call our downtown) around Rittenhouse Square and Fitler Square, both of which are areas in which I lived at one time, and both of which contain a rich array of architecture. It’s a section of the city criss-crossed with small streets that are lined with old, real townhouses, (large, 19th Century, single family city houses, as opposed to the misnamed suburban constructions for which “townhouse” is a euphemism used to avoid calling them what they actually are, row houses).

Campana has also found a rich source of subjects in the city parks themselves, Rittenhouse Square is a marvel of a city park, and Fitler Square is a small treasure, unknown even to many Philadelphia residents. The two areas actually adjoin one another, and I used to enjoy the visual richness as I walked through them on my way to school when I was a student at the Pennsylvania Academy of the Fine Arts.

Campana, was a graphic design student at the Art Institute (Philadelphia has more art schools per capita than any other city in the U.S.), but moved into gallery art shortly after graduating; and, like many artists, considers most of his painting skills self-taught. Campana is from South Philadelphia and has exhibited in the city for years, both in galleries like The Newman Galleries, The Home Works Gallery and the Kevin Butler Gallery, but also in the city’s juried outdoor art exhibitions.

I’ve encountered Campana and his work before at the Rittenhouse Square Fine Arts Annual (one of the oldest juried outdoor art shows in the nation), and I ran into him again last weekend at the Manayunk Art Show. Manayunk is an area of Philadelphia that feels a bit like a European town, perched on a hillside above a river, filled with tiny streets and small houses, and is an ideal setting for an event that is part juried art show, part street fair.

These kind of exhibitions allow Campana, and artists like him, to connect directly with their patrons in a way not ordinarily possible in a gallery setting, which lends itself particularly well to artists whose work has that element of a local connection.

Unfortunately the images of Campana’s paintings on his web site are a bit small and not always reproduced as well as I would like, making it difficult to see the visual charm in his brush marks and paint surface, lively with bits of scumbling and broken color.

I particularly like his contrasts of light and dark, textures of stone and brick and his frequent portrayal of dappled light and shade on the small side streets.

To those of you not in Philadelphia, or even the U.S., perhaps his images will pass over into the distant and different, but for me they’re wonderfully familiar.