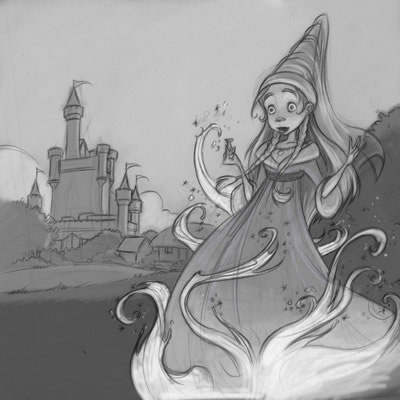 Sarah Mensinga is an illustrator and concept artist living in Texas. The brief bio on her site indicates that she is a graduate of the Sheridan College classical animation program, and has worked on various animated TV shows and films, including The Ant Bully.

You can see some of her work for that film in the Film section of her online Galleries, which also include sections for Illustration and Character Design.

Mensinga has a stylized approach with lots of exaggerated thick to thin variation in her forms, giving her drawings a springy, cartoonlike energy well suited to animation concept design.

She is currently using the comics-like quality of that style on a children’s book called Dragon Girl (image above), for which you can see a preliminary version, realized in line and tone drawings, on her site. Her drawings for this have a nice feeling of classic fairy tale animation. Even though these are not intended to be final illustrations, I really enjoy both the loose, informal feel of the drawings and the underappreciated chram of monochromatic tone drawings.

Mensinga also has a blog called Sarah’s Sketches on which she writes about about progress on the book and posts sketches for other projects as well as drawings done just for fun.

[Link via the Flight blog]