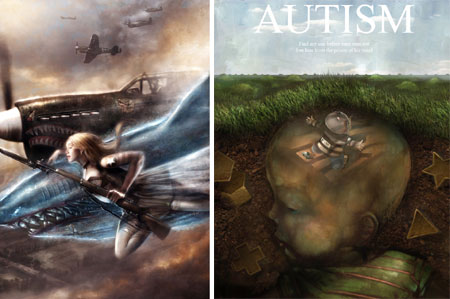 It’s always particularly sad when my first post about an artist is to mark their untimely passing.

Angus was a Senior Artist and major contributor to game developer Raven Software and there is a tribute page posted on their site, which includes an address for a memorial fund for his family.

His clients also included Wizards of the Coast, for which he created imaginative and fun illustrations for their popular Magic: The Gathering collectable card game.

His portfolio on CGSociety includes his delightful illustrations for a proposed children’s book Filling Valhalla as well as numerous drawings and illustrations.

There is page of his “Victory Gals” project on ConceptArt.org, in which he works in modern digital painting techniques in Photoshop and Painter in a series of themed images that harkens back to WWII aviation posters (image above, left).

The last part of Angus’s life was consumed with his efforts to secure treatment for his two year old son, Teddy, who was diagnosed with autism in December of 2006.

Children with autism respond to early intervention, but in many states, like Angus’ home state of Wisconsin, there is an unfortunately long waiting list for aid in acquiring the expensive therapy; and therapy is often critically delayed through periods when it could be of the most benefit to the child.

As part of his effort to change this and the unhelpful current policies of most medical insurance companies, both for his own son and other children, Angus created poster with his illustration of his son as he pictured him, as child trapped inside the barriers of his own mind, without voice (image above, right).

All of the interior pages on Angus’s site are now prefaced with his explanation of the situation, a large version of the poster image and some information on contacting the governor’s office in his state.

I don’t know much about autism, but I’ve tried to provide a couple of jumping off points for information in the links below, as well as a list of links to pages and galleries with Angus’ artwork. It’s now up to others to carry on his fight.

Addendum: The CGSociety has posted an extensive tribute page for Glen Angus.

[Information and links courtesy of Charles Morrow and “Dominus Elf“]