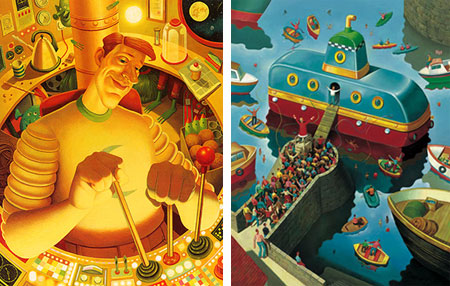 Though he does other advertising and editorial illustration, U.K. illustrator Simon Bartram is noted for a series of children’s books that he both wrote and illustrated: Watch out for Sprouts, Dougal’s Deep Sea Diary (image above, right) and Man on the Moon (a day in the life of Bob) (above, left).

He has also illustrated children’s books for other authors, including Pumpkin Moon by Tim Preston, A Christmas Wish by Marcus Sedgwick and Night and the Candlemaker by Wolfgang Somary.

Bartram’s children’s book illustrations often have characters with smallish heads and overlarge hands, and are painted with a kind of textured solidity that gives the exaggerated images a sort of nice, cheery goofiness. That, combined with backgrounds and scenes loaded with lots of objects and colorful details, provides a rich smorgasbord of shapes, colors and textures to satisfy the visual appetites of kids and adults alike.

It’s easy to overlook the fact that illustrations for children’s books aimed at younger kids must appeal to both the kids and the adults, who need to remain amused themselves through repeated readings.

Though Bartram doesn’t appear to have a web site, he has a portfolio on the site of his rep, ArenaWorks and another on the SAA Illustration Hub.