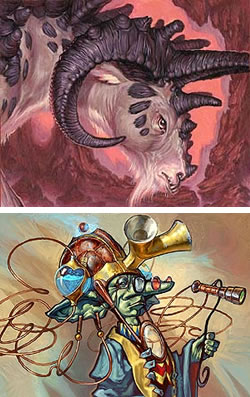 According to his brief bio, illustrator Matt Cavotta grew up playing games like Scrabble, Balderdash and Boggle, grew into a fascination with fantasy games like Dungeons and Dragons and Magic: The Gathering, and carried his love of gaming into a career largely focused on illustrations for games.

Notably, his work for the Magic: The Gathering card based series and his magazine covers for Dungeon and Dragon show a splendiferous range of grotesque and sometimes gruesome images of fantasy themes. His magical animals, wizards, trolls, dragons, monsters and other bizarre characters are rendered with a strong sense of solidity, texture and atmosphere, which makes them all the more fun. Cavotta uses a strong range of value and high chroma palette to give his images a feeling of intensity and drama.

Unfortunately, the images reproduced on Cavotta’s site are inexplicably small. I came across a nice big reproduction of one of his pieces in a Spectrum collection and was impressed with it at the size of a full page. I was subsequently disappointed that the images on his site are not larger. The good news is that there are quite a few images shown, so you can get an idea of the breadth of Cavotta’s work, if not the depth.

The bad news is that you’ll need to be patient and perseverant to see many of them because navigation is a bit awkward, requiring you to click and click back to view each image. There’s also no obvious indication that the button labeled “Cavotta Home” at the top of the pages is actually a drop-down menu for the other site sections.

There is a menu at the page top for “Other Artists” which leads to a circle of sites of several artists with whom Cavotta apparently shares the masthead of “Daydream Graphics” (including Adam Rex, who I’ve previously profiled).

Some of Cavotta’s more imaginative images start to edge out past the traditional subject treatments for fantasy illustration into territory usually associated with fantastic or visionary gallery art, and the rendering of horns and scaly skin on his dragons and other fantasy animals make me think he would be interesting as a paleo artist.

I know that that his work for Magic: The Gathering is meant to be reproduced at a relatively small size on the cards (list here), but some of his larger format work is for magazine covers, and all of it is so rich in detail that I think it’s really unfortunate that he hasn’t reproduced at least a few pieces on his site at a larger size.