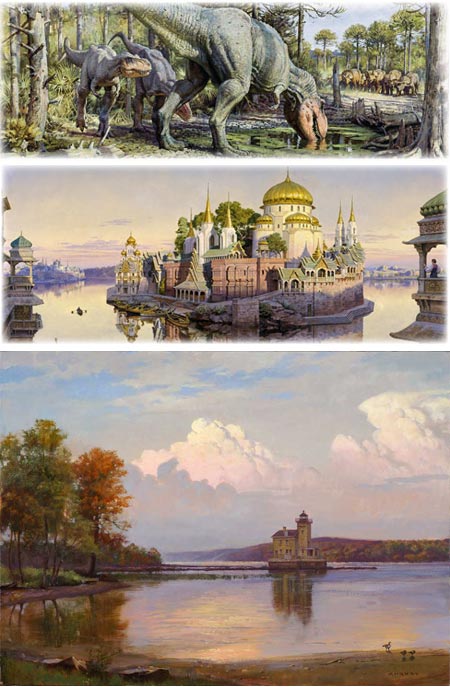 I received a note through James Gurney’s mailing list that his Dinotopia site has been completely redone and expanded with new content, largely in support of the newest book in his Dinotopia series, Dinotopia: Journey to Chandara.

In addition, Gurney has a new blog, Gurney Journey, in which he intends to chronicle the people and places he and his wife (who is also an artist) encounter as they travel on the book release tour.

As I mentioned in my previous post about Gurney, Dinotopia (images above, top and middle) is a series of illustrated fantasy stories, in which the illustration/text ratio is nicely weighted toward illustration. The stories are about a land where intelligent dinosaurs co-exist with people in a vaguely late 19th Century level culture; and in them Gurney mixes a fascination with dinosaurs with a passion for Victorian painting and 19th Century academic art (particularly Sir Lawrence Alma-Tadema).

You can tell that Gurney keeps abreast of the latest paleontological discoveries, as his portrayal of various dinosaurs has changed to reflect scientific revisions over time, in spite of the overtly fantastic setting.

If your only exposure to the Dinotopia stories is by way of the cable TV mini-series, the books are much more engaging, largely because of Gurney’s wonderful illustrations; and the new book promises to be one of the most visually striking of the series. You can see some sample pages on the Dinotopia site and the publisher, Andrews and McMeel, also has a web space devoted to Journey to Chandra.

What isn’t made obvious on the Dinotopia site or the blog is that Gurney is also a landscape painter (image above, bottom), working in the area, and somewhat in the tradition, of the Hudson River School.

Addendum: Those in Los Angeles, CA and Oshkosh, WI will have the opportunity this fall to see Gurney’s work in person in the form of two exhibits: Dinotopia: The Fantastical Art of James Gurney is at the Los Angeles Public Library from Aug 4, 2007 – Jan 6, 2008, and Return to Dinotopia will be at the Oshkosh Public Museum, November 3, 2007 through January 27, 2008. For more details see the Dinotopia Exhibitions page on the Dinotopia site.