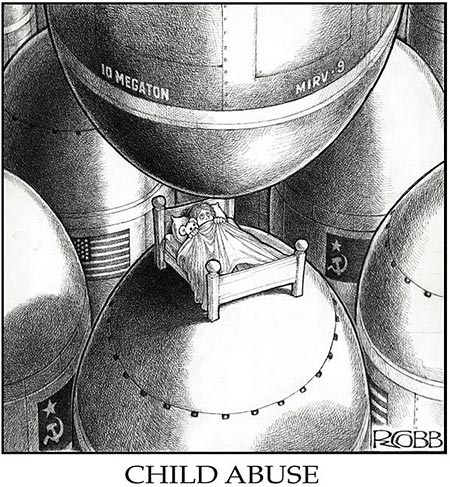 I’ve been wanting to write a post on Ron Cobb for some time now.

Cobb is a cartoonist, film production designer and concept artist from Los Angeles, currently living and working in Sydney, Australia.

When I went to write a post on Cobb last year, I was disappointed to find that there wasn’t much material available on the web. Cobb had an official site, but there was little to it but promises of “coming soon”. I was recently pleased to find that, despite continued protestations of the site being “under construction”, there is now sufficient material on his site for me to remind you of (or introduce you to) the work of this terrific and unjustly overlooked artist. In addition, new material has cropped up in a few other places.

Cobb began his career as an in-betweener and eventually breakdown artist for Disney, working on the ground-breaking feature Sleeping Beauty, but was laid off by Disney in 1957. (“In-betweeners” were junior artists who drew the frames in-between the “key” frames drawn by the senior artists; from which we get the term “tweening” as used in modern computer animation.) Cobb drifted between odd jobs for awhile before finding his new niche.

In the 1960’s and 1970’s there was a lively, energetic “alternative media”, consisting largely of small, independent “underground” newspapers, that opposed the deficiencies and corruption they saw the established order and viewed the mainstream media as tool of the corporate and political elite. (These days, of course, that function is largely served by the web.)

Cobb became the premiere editorial cartoonist for that generation’s countercultural voices. From 1965 to 1970 he drew editorial cartoons for the L.A. Free Press and in the early 70’s for The Digger in Melbourne, Australia; and his cartoons were distributed to other alternative papers through the Underground Press Syndicate.

I don’t use the term “political cartoons” when referring to Cobb because his work often transcended poiltics and dealt with larger issues. His caustic cartoons from the 60’s and 70’s exposed our follies, not just as a group or a party or a nation, but often as a species, in a biting, no-holds-barred commentary that few mainstream cartoonists could approach.

And what cartoons they were! His images were drawn with a raw, in-your-face energy and given a visual wallop by his use of intensely detailed crosshatching, contrasted with large open areas of negative space, and often dealt with subject matter that was disturbing and horrific. He pulled no punches when trying to point out to us how blind and short sighted we were; often portraying a stunned looking everyman who finds himself in some dystopian near-future, shocked with the outcome of our foolish species’ predilection for pollution, racism, violence, war and other monumental stupidity.

There were some collections of his cartoons printed, but they are unfortunately out of print. You may be able to find some used, if you can find someone willing to part with their copies. Personally, I treasure my battered copy of Raw Sewage.

Cobb also was in evidence as an illustrator, particularly within that same counter-cultural milieu; for example, did the terrific wrap-around cover for the Jefferson Airplane’s After Bathing at Baxters album (back when 12″x12″ record albums covers were the “big canvas” for illustrators).

Eventually, he moved back into the film industry, which answers the question for all of his cartoon fans of “Where has he been all these years?”

As a production designer and concept artist, Cobb has worked on films like Leviathan, The Last Starfighter, Conan the Barbarian, Dark Star, Back to the Future, Aliens, The Abyss, Total Recall and Firefly.

There is a somewhat scattered selection of work in various categories on his site, arranged by year. The best of the posted material is the selection of cartoons in the 1955-1987 section. Some of them are frighteningly prescient.

Cobb is currently continuing his work in the film industry, but I was surprised and delighted to see that he may return to editorial cartooning by way of his web site in the near future, something I would very much look forward to. I think this insane world could use a good dose of Ron Cobb cartoons about now.