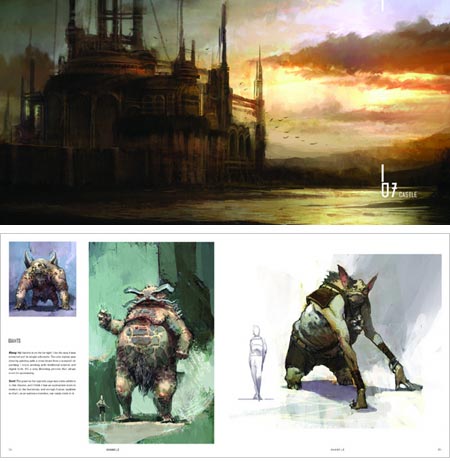 Scott Robertson, Entertainment Design Director at the Art Center College of Design, in Pasadena, created a project with three of his top students, Khang Le, Mike Yamada, and Felix Yoon, in which they used the Grimm Fairy tale of The Skillful Huntsman as a springboard for a project about the process of learning concept design. In the course of the project the three students created an extensive range of concept design solutions for the story as if for a movie.

The result is The Skillful Huntsman presented as a terrific book of concept art, that sheds a unique light on the process of creating concept designs and the experience of learning that process at a top design school. The book is filled with the concept drawings and paintings of these three talented artists, and their varied takes on the subject are particularly fascinating.

Granted they have taken some liberties in including things like “vehicles” (largely ridable animals), cities and characters that are a stretch from the original fairy tale, but that in itself is true to the way Hollywood would certainly deal with the subject were it actually to get the modern movie treatment.

You can read about the book on the Design Studio Press site, and there is a gallery with some (unfortunately small) images.

I profiled Scott Robertson himself about a year ago. You can see his accomplished work on his own site, DRAWTHROUGH, and you can also find collections of his work on the Design Studio Press site.

Side note: in my effort to find a text copy of the original Grimm story of The Skillful Huntsman, for which I found a somewhat hard to read version here, I also came across this, apparently unrelated, tale, also called The Skillful Huntsman, illustrated by the great illustrator Howard Pyle as part of his story collection Pepper and Salt. Not really germane to the post, but any excuse to look at Howard Pyle drawings is a Good Thing, even if they’re not well reproduced.

One Reply to “The Skillful Huntsman”